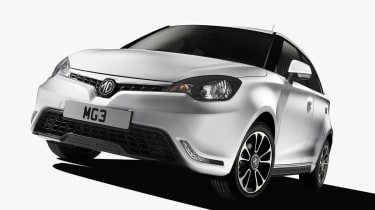 The MG3 has been revealed ahead of its launch in the UK and Europe later in the year. Its debut at the 2013 Shanghai motor show reflects the home of MG ownership nowadays, but the car is being targeted at buyers in the country it’s made. Production begins at the Longbridge plant in Birmingham this summer. Heavily influenced by the MG Zero concept car, the MG3 looks a much fresher and more modern car than the MG6 it sits below. It will fight the Ford Fiesta, Vauxhall Corsa and Skoda Fabia with more assertive styling, all MG3s coming with a body kit, alloy wheels and ‘hockey stick’ LED running lights. Driving its front wheels is a 104bhp 1.5-litre naturally aspirated petrol engine, which is mated to a five-speed manual gearbox. MG boasts of hundreds of thousands of development miles on European roads, with the MG3 designed to ‘deliver impressive levels of body control, sharpness and a willingness to corner to engage keen drivers’. The MG6 is a relatively sharp drive; if its younger sibling can build on that it could be a leftfield choice in a packed and competitive supermini class. The front suspension comprises MacPherson struts, the rear a torsion bar, while the power steering system is hydraulic. Like many of its rivals, the MG3 will offer an array of colours, wheels and personalisation options. Equipment levels are likely to be reasonably strong, too, ensuring the smallest MG has some value credentials, while at 4m long and with a 2.5m wheelbase, it should be a little roomier than key rivals. Prices will be announced closer to the summer, but a starting point around £9000 is a good bet. Also on MG’s Shanghai motor show stand is the CS concept, a crossover that could take on the Nissan Juke and Skoda Yeti in production form.