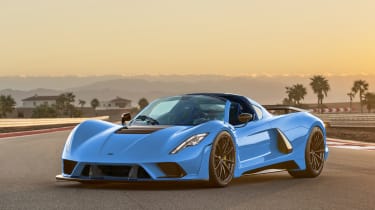 Following a teaser of a roadster variant earlier this year, Hennessey Performance has finally confirmed official engine specifications for its upcoming Venom F5 hypercar. It’s been a long time coming, but should these figures concern the likes of Koenigsegg and Bugatti?

Two years after the model made its world debut at SEMA in Las Vegas, Hennessey Performance announced that testing would commence in late 2019, when the Texan tuner will find out if it’s done enough to better the Agera RS, the world’s current fastest production car.

As for specs, a 6.6-litre twin-turbocharged LS V8 puts 1817bhp and 1193lb ft of torque to the rear wheels at 8000 and 5500rpm respectively, far exceeding expectations – that puts it quite some way above its rivals from Koenigsegg and Bugatti, in terms of power figures. Company CEO and founder, John Hennessey, said: ‘We exceeded our target horsepower number. Actually, we blew our target number out of the water by delivering over 1800 horsepower.’

In order to reach such numbers, Hennessey used lightweight, reinforced components throughout in order to maximise efficiency and strength. Take the turbochargers, rated at a staggering 1350bhp each; 3D titanium printing was used to form the compressor housings in order to maximise strength, and likely reduce the costs usually associated with producing a component with such high tolerances. A unique intake manifold design, multi-stage dry sump, increased cylinder wall and deck thickness and more, will all work in unison to produce almost twice the power of the original Bugatti Veyron. 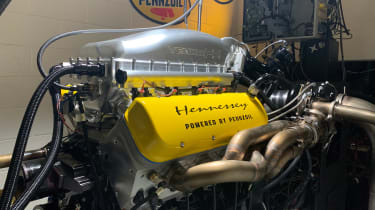 Another impressive accolade is its quoted sub-1360kg weight figure, an amount that would yield a rather ridiculous power-to-weight ratio of over 1300bhp per tonne when combined with 1800bhp, much greater than the 1000bhp per tonne of the limited-run Koenigsegg One:1.

Projected performance for the Venom F5 is a 0-186mph sprint in under ten seconds, with the model said to go from standstill to 249mph and back to rest in under 30 seconds – 7.3sec sooner than the Agera RS.

Speaking at the car’s launch, John Hennessy said: ‘We expect the Venom F5, named for the most powerful tornado-speed winds on the Fujita scale, to be the first road car capable of achieving more than 300mph and have worked closely with Pennzoil to get us across the finish line.’

Though the brand is known for its American origins, the lightweight carbonfibre backbone of its upcoming flagship is being designed and engineered in the UK, by Silverstone-based Delta Motorsport. By nature, carbon tubs allow for the removal of a car’s roof without compromising structural rigidity – this means the option for a roadster isn’t out of the question, even for a car destined for such high speeds.

Don’t get too excited though, as although Hennessey has released renders of a topless F5, it has made it clear that it will only consider the idea once coupe deliveries have begun next year, with roadster production beginning in 2021 should the project be given the all-clear.