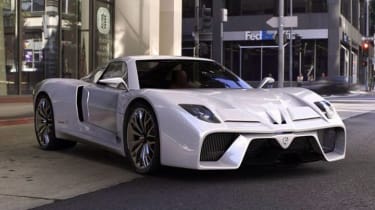 Another week, another obscure supercar. Whilst last week’s Minerva J.M. Brabazon promised to out-drag the world’s fastest hypercars, this week’s supercar promises to out-run them. Because this week, electric vehicle maker Tecnicar has confirmed its intentions to build an all-electric supercar called the Lavinia.

Producing 788bhp and undoubtably an even more mammoth amount of torque, the Lavinia is expected to be capable of racing from 0-62 in 3.5sec and onto a 186mph top speed. Even so, it’s a 186 mile range from full-charge that we find most interesting, because whilst the straightline performance is impressive, the range could make the Lavinia a very usable zero-emissions vehicle.

For now though, it’s still very much at development stage – to the point little more than renderings and a scale model exist – but the experience of Italian electric vehicle expert Tecnicar gives this proposition a little more weight. The company, based in Siracusa, already makes small electric cars, electric tourist trains, boats and mobility vehicles for the disabled, so it at least knows a thing or two about electricity.

The released renderings show that the Lavinia will avoid taking the BMW i8 route of looking like a car for the future, and instead seems to take heavy inspiration from analogue supercars like the Ferrari Enzo. There’s even a bit of Alfa Romeo 4C in those taillights.

With no information on the specs of the electric powertrain, we’d be unwise to suggest the Lavinia was likely to ever arrive on our roads. But given the experience of its maker and rate of development recently felt in electric powertains, could we one day see an electric Italian supercar with more power than Ferrari’s F60 America and the usability of Tesla's Model S? We'd certainly welcome its arrival.