Lister has announced plans to build a £2 million hypercar to take on the likes of the McLaren P1, LaFerrari and Porsche 918 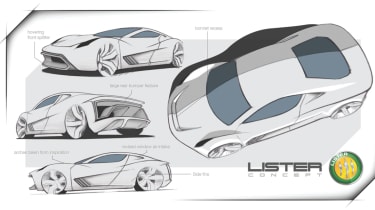 The Lister Motor Company could expand the Lister business with the of launch a new, ‘highly sophisticated’ hypercar. It hopes the creation of such a car would help return the company to the ‘leading edge of sports car manufacturing’.

The announcement is a by-product of Lister’s recent success with it’s £350,000 ‘Knobbly’ anniversary cars. Nine Knobblys have been sold in the past 12 months since the company’s re-birth, resulting in an order book with a value of over £3million.

As Laurence Whittaker, MD of Lister Cars states: ‘our aspiration has always been to return the Lister brand to the forefront of people’s minds. The ‘Knobbly’ project has firmly established that the Lister name still has enormous good will and we know we have a brand with a lot of marketable collateral attached to it.'

'Over the coming years our ambitions are to create a world beating brand new hypercar with a list price of £2million. We are currently seeking external investors that have the desire to join us on what promises to be an incredible journey, because if we proceed with our ambitious plans, it is fundamental that the entire project is sufficiently resourced in order to deliver a serious, world-beating new product.’

With such a hefty price-tag, Lister will have to demonstrate that its hypercar is worth more than Ferrari, McLaren, Porsche and even Koenigsegg's very best. We can only speculate as to whether it'll posses the hyper-tech of the first three or monumental grunt of the latter, but at £2million, it'll certainly have to bring something new to the table.

Whilst not a household name in recent years, the brand has an extensive history. After rising to iconic status as the original Lister Company in the 1950s, Lister returned to the market in 1989 under the leadership of Laurence Pearce, launching the £115,000 XJS 7.0 V12 which sold as 90 examples. Continuing under Pearce, Lister then proceeded to build the successful Lister Storm Le Mans GT car, selling four £350,000 homologation specials for the road in the process.

Brian Lister, the founder of the original company, has reportedly given his full support to the new hypercar project and remains an advisor to the current management team.