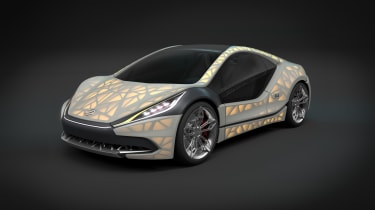 The annual Geneva motor show is something of a crucible for automotive oddities, and engineering firm EDAG is set to continue that tradition with its Light Cocoon concept sports car at the 2015 exposition.

While light has some relevance to the concept’s glowing panels, it also refers to the car’s 3D-printed construction. This is where EDAG has taken inspiration from nature, creating what it calls a ‘skeleton-like, organic structure’.

Rather than a traditional monocoque, where metal formations and panels act as both the vehicle’s skin and load-bearing surfaces, the Light Cocoon has load-bearing architecture not dissimilar to the skin of a leaf.

Material not actually required to bear any load has been removed, leaving behind a mesh of alienesque forms.

To ensure occupants aren’t left open to the elements under this branch-like framework, relevant panels are wrapped in a material called ‘Texapore Softshell’, by outdoor clothing specialists Jack Wolfskin.

The textile is light, stretchable and weatherproof, as well as lightweight – a square meter of the fabric weighs just 19g. Finally, the skeleton and skin-like combination is back-lit, giving the Light Cocoon its unique appearance.

The rest of the car looks fairly conventional, with what appears to be a two-seat layout and glass doors like that of the early BMW i8 concept.

Further details – engine, drivetrain and the weight of the vehicle itself, haven’t yet been revealed. Information should be released closer to the show itself. The 2015 Geneva motor show opens on March 5, 2015.