Michelin Supercar Run: why Goodwood’s 2015 class is the best ever 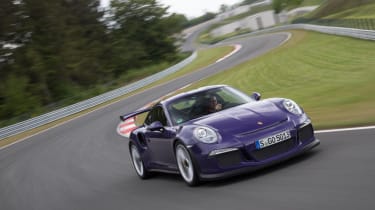 The Ferrari 488 GTB will make its UK dynamic debut in this weekend’s Michelin Supercar Run, joining Jaguar’s Project 7, Mercedes’ AMG-GT and 38 other supercars in the 2015 Goodwood Festival of Speed hill climb class.

McLaren will field its 570S and one of just 50 650S Le Mans, as well as its track-only 986bhp P1 GTR. Ferrari has confirmed it’ll be sending its answer to the GTR, the FXX K, up the hill as well.

Not wanting to be left out, Koenigsegg will be entering its 1341bhp One:1 megacar and 1124bhp Agera N into the run, while Lamborghini will entrust racing driver Edoardo Piscopo with its Aventador LP750-4 Superveloce.

A sure crowd favourite will be the Lexus LFA, with its spine-tingling 552bhp V10 screaming up Goodwood’s famous hill. James Glickenhaus will pilot his Scuderia Cameron Glickenhaus SCG 003, while previous event winner, Anthony Reid, will do his best to take the Noble M600 to the top spot.

Though many will go up against the stopwatch, not all cars will be timed. Instead, the Michelin Supercar Run serves as a chance for manufacturers to demonstrate their latest machinery to another sell-out crowd.

Last year’s Supercar Run was the first to time its entrants. It was the Nissan GT-R Nismo ‘Time Attack’ of Jann Mardenborough that took the win, setting a supercar time record on the way. His sub-50sec time beat the fastest efforts of ex-F1 drivers Bruno Senna, Derek Bell and Rupert Keegan, and even ranked him amongst purpose built race cars from other classes. This year’s entrants will be happy to see that Nissan won’t be taking part in 2015.