A selection of 80s and 90s supercars, plus BTCC cars will cross the block at the Silverstone Classic sale 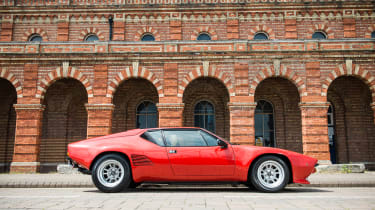 Silverstone Auctions’ biggest sale of the year will take place at the Silverstone Classic on July 25-26.

As 1990s BTCC cars and historic Formula One cars circulate Silverstone’s twists and turns, some iconic sports cars will cross the block – including the first Porsche 964 RS ever produced and a uniquely-painted Ferrari 360 Modena.

Star of the auction is sure to be a 1989 DeTomaso Pantera GT5-S. It’s one of only five right-hand drive versions of this particular model ever produced, from a total factory production of 187 worldwide.

Resplendent in Rosso Corsa with a suitably Italian Crema leather interior, the car’s original 5.8-litre Ford ‘Windsor’ V8 has been enlarged to 6.4 litres. While some may baulk at the change, Silverstone Auctions notes that the block is original, so the car could be returned to its factory specification. 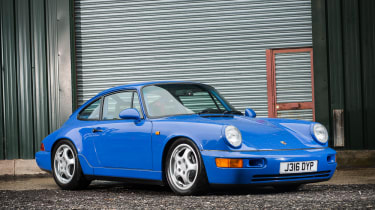 The Maritime Blue RS is the first 964 RS ever produced and was allegedly gifted to Porsche racing driver Ulrich Richter, customised for use around the Nurburgring. The car has resided in the UK since 1995 and enjoyed plenty of attention since, including an engine rebuild in 2005, a suspension and braking system overhaul in 2006 and a new coat of paint in 2008.

Paint is the defining feature of the left-hand drive, 1999 Ferrari 360 Modena also crossing the block at Silverstone. Originally purchased in Kuwait, the F1-transmission 360 wears a vibrant coat of Orange Flame metallic paintwork. A guide price of £38,000-£42,000 reflects the limited appeal such a colour will have to Ferrari enthusiasts.

Auction house Girardo & Co. is set to offer one of the world’s finest collections of racing Lancias later this month
Top 10 most expensive cars ever sold at auction

The super-rich spend vast sums of money to own the world’s most desirable cars, but which are the most expensive ever sold at auction?