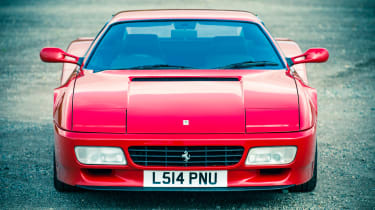 Once the epitome of 1980s excess, Ferrari’s Testarossa is now becoming a desirable, collectable car that perfectly represents its era.

Few cars boast such an iconic shape, from its wedgy profile to the slatted rear grille and imposing side strakes. And in Rosso Corsa paintwork, like the example up for sale next month at Silverstone Auctions’ NEC Classic Motor Show Sale, it comes close to being the definitive Ferrari form.

A five-speed open-gated manual sits neatly in a black leather cabin, though red carpets bring a touch of the vibrant exterior shade inside the car. An extensive service history at both main dealers and specialists gives the car strong provenance – and its £110,000-£130,000 estimate matches recent sale prices for clean Testarossas.

It’s not the craziest car to star in the Classic Motor Show sale, however. That honour falls to a 1984 Renault 5 Turbo 2, Renault’s first foray into barmy mid-engined hatchbacks that culminated with the Renault Clio V6 in the late 1990s. 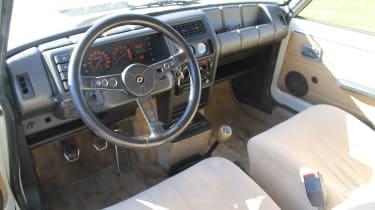 The Turbo 2 burst into life as a homologation special, allowing Renault to compete in otherwise relaxed Group 4 rallying regulations – the same category that gave the world the Lancia Stratos and original Audi Quattro.

As the name suggests, the Turbo 2 was the second generation of the car, created after Renault had already produced the required 400 units of the first homologation special. This particular example reached UK shores in 1985, and has covered 55,000 miles in that time at the hands of only four owners – the third of which owned the car from 1988 until 2014.

The most recent owner took responsibility for recommissioning the car to its current status, overhauling and replacing the brakes, radiator, water pipes, water pump and fanbelt. The 1.4-litre turbocharged engine enjoys a refurbished fuel system and injectors, while filters, plugs and HT leads have all been replaced.

There’s also a full set of new Michelin TRX tyres, and while the car is described as ‘not a concours queen’, its nicely patinated, original paintwork and beautifully-preserved interior make it highly desirable. As does its rarity: fewer than 50 Turbo 2s remain in the UK, making the £45,000-£55,000 estimate seem tempting indeed.

The NEC Classic Motor Show Sale is hosted by Silverstone Auctions, and takes place on Saturday 14th-Sunday 15th November at the NEC in Birmingham. You can view the current lot list here.