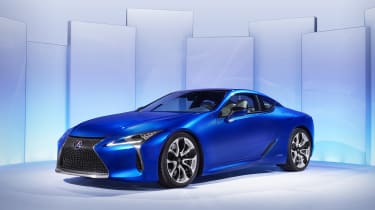 Lexus has announced that the hybrid version of its new LC luxury coupe will make its debut at the 2016 Geneva motor show.

The LC 500h is a hybrid version of the car which made its international debut at the Detroit auto show earlier in the year, a car itself based strongly on the LF-LC concept first shown back in 2012.

Lexus will reveal full details of the LC 500h at the show, but the company has already said the car will use a new Lexus “Multi Stage Hybrid System”.

At its heart is a 3.5-litre V6, developing 295bhp on its own. As in previous Lexus hybrids, this is then boosted by an electric motor and a battery - lithium-ion, in this instance. Total system output is quoted at 354bhp, releasing enough performance for a sub-5 second 0-62mph time.

Where the Multi Stage system differs from previous Lexus hybrids is in using physical gears in the transmission. Previously, the planetary gearset used to meld electric and combustion power acted much like a continuously-variable transmission, which was great for efficiency but not so great for keen drivers. Lexus now promises the physical gears offer greater feeling of interaction between throttle inputs and forward motion - and a manual mode lets the driver select their own gears.

The new transmission is heavier than the old Hybrid Synergy Drive, but efforts to reduce the weight of the electric motor, and the battery (50kg) have offset the difference.

The company says it will provide the LC with ‘higher performance, more driving pleasure and greater efficiency’. The LC itself is based on all-new underpinnings, an all-new premium rear-wheel drive system, for ‘greater dynamic capabilities’. The platform utilises a mixture of high-strength steel and aluminium, while a carbonfibre roof is optionally available.

Lexus has tried to place as much of the car's mass, from the engine to the occupants, as low as possible in the chassis and as close to the centre as is practical. The overhangs are short, the (forged alloy) wheels are large and pushed out to the corners, and the engine has been pushed backward for a front-mid engine layout.

The hybrid model will join the LC 500 coupe in the LC range. This uses a more traditional powerplant, with a 467bhp, 5-litre naturally-aspirated V8 – like that used in the RC F and GS F models.

There’s 389lb ft of torque too (developed at 4800rpm), while the 0-60mph sprint takes less than 4.5 seconds. Despite the performance claims, Lexus says the model is more of a grand tourer than an out-and-out sports car.

Joining the LC 500h at Geneva is the LF-FC concept, thought to be a preview of the next-generation of Lexus’ flagship LS series. Unveiled at Tokyo last year, the concept uses a high-output fuel cell drivetrain, a range of autonomous features and gesture-operated controls.

Keep up to date with the latest Geneva motor show news on our hub page. The show opens its doors to the press on March 1.