Akio Toyoda's efforts to turn around Toyota continue with a striking, hybrid-powered crossover 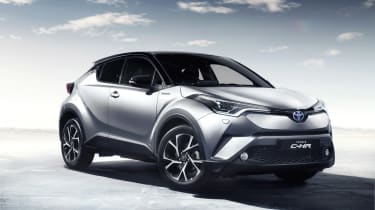 Thinly-veiled production cars billed as concepts have somewhat devalued the term in recent years, but that makes cars like the Toyota C-HR, launched in Geneva, all the more interesting.

Few could have expected Toyota’s production crossover to be quite as outlandish as the concept that spawned it, but the end result is surprisingly close to the coupe-like form first revealed at the 2014 Paris motor show. Meanwhile, its interior design – now revealed – is as high-tech as the exterior is striking.

Like Nissan’s Juke – another car that remained striking from concept to production – the C-HR will be an acquired taste, but it’s illustrative of just how competitive the crossover segment is that manufacturers will go to such lengths to make their products stand out.

The C-HR sits on Toyota’s TNGA global architecture platform, first seen with the latest Prius. Like the Prius, the C-HR’s main powerplant will be the firm’s latest 1.8-litre hybrid drivetrain, which will return CO2 emissions of under 90g/km with a 120bhp output. Official fuel consumption of 76.3mpg is claimed. 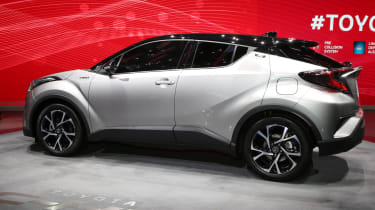 The alternative is a 1.2-litre turbocharged four, producing 114bhp and offered with a six-speed manual or CVT automatic. The latter also has a four-wheel drive option.

If all of this sounds like the recipe for a dull drive, C-HR chief engineer Hiroyuki Koba claims to have benchmarked the car’s precision and control on that of a C-segment hatchback, rather than other crossovers. A low centre of gravity, excellent body control and fluid steering are the intentions.

The C-HR is a five-door vehicle (despite impressive efforts to hide the rear doors with high-mounted handles and strong body lines), 4360mm in length by 1795mm wide and 1555mm tall (marginally shorter, narrower and lower than a Nissan Qashqai) and spec highlights include full LED headlights and LED rear light clusters.

Toyota has also revealed the C-HR's interior, created through what Toyota describes as a 'Sensual Tech' design concept. 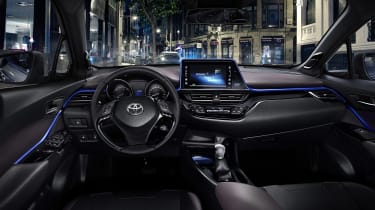 Like recent Lexus models there's very much a horizontal theme to the cabin, with a complex, layered instrument panel. It's broken up by the use of a prominently-positioned eight-inch touchscreen display running the firm's latest Toyota Touch 2 media system, but Toyota says the dashboard itself is low, rather than the screen being high, so visibility should be better than the images suggest.

Toyota has concentrated on giving the cabin a quality feel, limiting materials to just three finishes - a leather-like grain to 'background surfaces', a smoother Nappa feel to parts you're likely to touch, and a 'technical grain' for switches and minor functions.

It should reduce the plastic-fantastic ambience we've seen in Toyotas in the past. Three colour schemes - dark grey, black/blue and black/brown will be available depending on the trim level.

Catch up on all the latest Geneva motor show news and videos on our hub page.