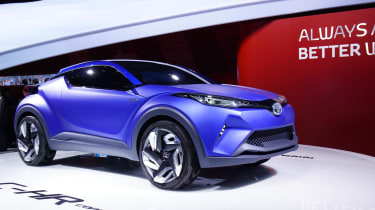 No self-respecting car manufacturer can do without a compact crossover in its range right now and Toyota is the latest to preview such a vehicle, the C-HR concept launched at the Paris motor show.

While vehicles in this class can be a little hit and miss, Toyota gives us hope that its own concept could at least offer a little driving excitement. The firm says the C-HR targets 'new levels of dynamism and agility' and even features inspiration from the Toyota GT86 sports car.

Unfortunately the GT86's rear-wheel drive platform doesn't make an appearance here, but Toyota says the car features all-new C-segment architecture. At 4350mm long, 1850mm wide and 1500mm high it's a little shorter, a little wider and a little lower than the segment's best-selling Nissan Qashqai, while the three-door layout and narrow glasshouse gives the C-HR a much sportier stance.

The headlights and grille form a wing-style shape which leads into sharply-defined wheel arches. At the rear the floating roof tapers to sharp-edged C-pillars, and Toyota says the front and rear corners feature a 'shaved off' look, accentuating the flare of the wheel arches.

The four-square styling, lightweight construction and low centre of gravity might hint at the GT86, but the C-HR concept's powertrain has more in common with Toyota's other defining product - the Prius. The concept uses 'a new full hybrid powertrain' for 'significantly improved fuel efficiency', though no power or economy figures have been announced.