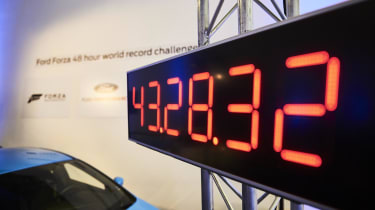 Ford have followed up its class victory at the 24 Heures du Mans with a virtual Guinness world record at the La Sarthe circuit.

Five gamers from five countries were gathered to endure over two days of virtual racing behind the wheel of a virtual WEC-spec Ford GT. They lapped the famous French circuit on the Xbox One’s Forza Motorsport 6 title. The event’s purpose was held to capture the ‘Longest video marathon on a racing game’ world record.

The previous record stood at 48 hours and 1 minute. Fueled by over 3 kilograms of sweets and 225 bottled drinks, the sleep-deprived gamers managed a staggering 48 hours and 29 minutes of concentrated high speed racing in the LM GTE Le Mans winner.

Between them, the drivers thundered down the Mulsanne straight over 3,000 times before completing 25,478 miles on the legendary track. All this impressed Stefan Mücke, one of three men who drove the WEC-GT to first place at Le Mans this year, replicating the feat of original Ford GT 40 fifty years ago to the day. 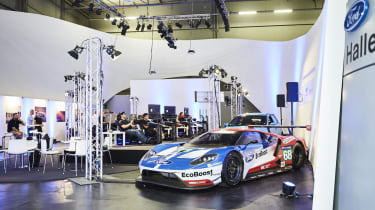 ‘They did an amazing job. Just like driving at the real Le Mans, this achievement required extreme levels of concentration, attention to detail, and most importantly endurance – because they had to keep going for twice as long as we did,’ said Mücke.

The platform for this record was Forza Motorsport 6, where the new Ford GT is the game’s headline car. Members of the road-going GT’s development team, and Microsoft’s Turn 10 studios have collaborated to give users a truly authentic virtual experience behind the wheel of the new supercar.

Being one of the top five raced cars in Forza motorsport 6 its popularity has transcended the virtual world, with Ford having just confirmed production extension of its new flagship model into 2020.