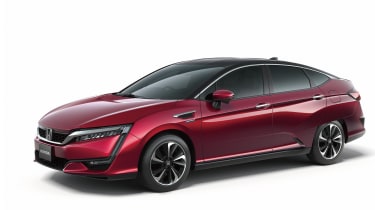 While some companies have nailed their flag to the battery-electric mast, others - including Toyota, Hyundai, General Motors (GM) and Honda - are putting more faith in fuel cells for the future of automotive energy.

The latter pair have been collaborating on the technology since 2013, and have now announced the automotive industry's first manufacturing joint venture to produce hydrogen fuel cells for production cars.

The joint venture should significantly cut costs for both manufacturers in a technology that few companies are pursuing with any real zeal. With battery technology improving all the time - and of more relevance across the technological world, given its applications in consumer electronics - it's so far taken the lead in the race to search for alternative powertrains.

> Read our review of the Rimac Concept One electric hypercar

Honda and GM's work so far has focused on developing next-generation hydrogen fuel cells and hydrogen storage technologies, helping improve the technology and bring down costs through economies of scale.

The new Fuel Cell System Manufacturing (FCSM) joint venture will continue that development while also producing fuel cells themselves for use in future vehicles from both companies.

So far, Honda is one of few manufacturers to put a fuel cell vehicle into volume production, in the shape of the Honda Clarity. Honda's offering covers 366 miles on a tank of hydrogen and offers petrol-equivalent economy of 68mpg, despite being quite a large and heavy vehicle. Toyota currently offers a production hydrogen car too in the shape of the Mirai (on sale in the UK), while Hyundai produced an ix35 FCEV crossover for a time. 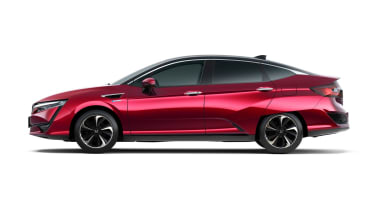 Ostensibly, fuel cell vehicles are electric vehicles, but rather than storing energy generated by an external source (in the form of electricity, chemically stored in a battery), the fuel cell uses hydrogen to generate the energy needed for electric propulsion.

There are negatives too, however - a hydrogen infrastructure is currently virtually nonexistant and expensive to set up, and current methods of producing hydrogen are energy-intensive, or derived from fossil fuel production - negating any potential environmental benefits.

> GTI's all-electric future - what lies ahead for VW's hot hatch?

In future, the aim is to power the hydrogen-producing electrolysis process through renewable means such as wind power, solar, or biomass, and it's a process that could even be done locally, reducing the need for transportation of the hydrogen "fuel" in the same way current fossil fuels are transported from rig to refinery to filling station.

Mass production of fuel cell systems is expected to begin 'by around 2020', according to Honda. The two companies are making equal investments totalling $85 million - and the joint venture is expected to create nearly 100 new jobs.