All-electric supercar proves EVs can be spectacular to drive 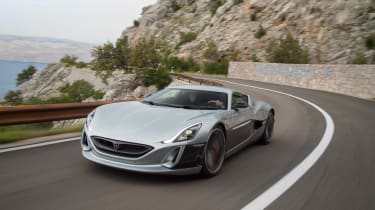 The world's first electric supercar? If anything can stake a claim to this accolade, it's the Rimac Automobili Concept One. Based on the outskirts of Zagreb in Croatia and controlled by founder Mate Rimac, his eponymous company isn't exactly a household name yet, and its car - the Concept One - is limited to just eight examples.

But Rimac is more than just a supercar manufacturer. Behind the scenes it's been quietly establishing itself as a supplier of electric drivetrains, working closely with major car manufacturers. It also applies its expertise to everything from bikes to boats. It's this strong brand-building which has enabled Rimac to build the Concept One.

The Concept One uses four electric motors, one driving each wheel, with batteries mounted along the spine of the car and behind the rear bulkhead. Open the rear hatch and you’ll see a power distribution unit where you’d expect to see the engine in a mid-engined car. 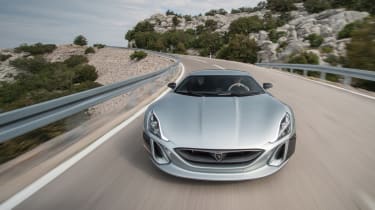 Being all-electric the Concept One doesn’t use a conventional transmission. However, in order to achieve the lowest possible 0-62mph time, it does feature two very small dual-clutch, two speed gearboxes within the rear axle. The shorter ratio gives maximum acceleration and runs up to around 100mph, but owners will be encouraged to leave their cars in the longer ratio most of the time.

Most modern high performance cars feature some sort of torque vectoring system, but none are as technologically advanced as the Concept One’s Rimac All-Wheel Torque Vectoring. The four electric motors can be precisely controlled to deliver a range of dynamic behaviour – be it stable on road manners or ultra-agile high performance track driving. There’ll also be a drift mode in the near future.

Featuring dozens of Rimac Automobili patents the Concept One is among the most technologically advanced supercars on sale. The drivetrain is undoubtedly the car’s centerpiece and every component within it has been designed and manufactured by Rimac itself.

In fact, the only major off-the-shelf components anywhere on the car are the Brembo brakes and KW suspension. Even the headlights and infotainment system are Rimac’s own designs.

The car is built around a spaceframe chassis with double wishbone suspension and pushrods all round. The steering is hydraulically assisted – electric assistance would have been more efficient but it didn’t give the steering feel the engineers wanted – and the tyres are Pirelli P Zeros.

The first thing you notice when you drop into the Concept One’s cabin is the headroom, or lack thereof. Anybody over 5ft10 will feel very cramped inside the cabin, while six footers will have to slouch heavily in the bucket seat just to find enough headroom to drive the car.

The cabin itself is attractively designed and the quality is mostly good, albeit with a distinct low-volume, hand-built feel. The infotainment system, meanwhile, is very clear and easy to navigate. 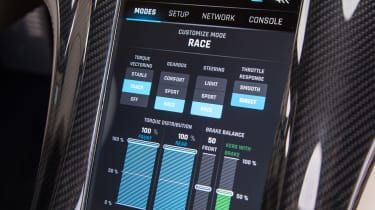 The steering is heavy in its default mode – there is a lighter setting – but it’s feelsome and direct with an immediate, slack-free rate of response at the front axle. There’s tension to the ride quality that works just fine on smoother roads, but on rougher sections the car does feel busy and unsettled.

With 250lb ft of torque being deployed through each front wheel the car has a habit of dragging itself across the road, too, but only on bumpier sections does it ever become an irritation.

One of the car’s major dynamic weaknesses relates to its braking system – or more accurately, its three braking systems. The first is the kinetic energy recovery, which slows the car significantly when you lift off the throttle so you can ‘one pedal drive’ around town. The second system is the regenerative braking, which inverts the motors when you stand on the brake pedal to recharge the batteries, and the third is the conventional brake system, which uses carbon ceramic discs and six-piston calipers.

The kinetic energy recovery system can be turned right down, which is useful because it tends to disrupt your rhythm on a quick run. The bigger issue, though, is that marrying all three braking systems together to give a progressive, feelsome and predictable brake pedal is close to impossible. As a result the Concept One can be a tricky car to have faith in when braking for a corner.

Under acceleration, however, the Concept One is remarkable. With so much torque available immediately it pulls phenomenally hard, without hesitation, and it actually accelerates with more force the longer you keep your foot in.

And then there’s the torque vectoring. The electronic super brain diverts more torque to the outside wheels than the inner wheels in the way into a corner, and actually applies negative torque – effectively a braking input – to the inside rear. This pivots the car into the corner and makes it feel incredibly agile.

The computer then favours the outside rear wheel for maximum drive out of the corner. The Concept One feels incredibly positive away from corners with no hint of under or oversteer, even if you apply full throttle much earlier than you think should be possible. That gives the car staggering pace on the road. 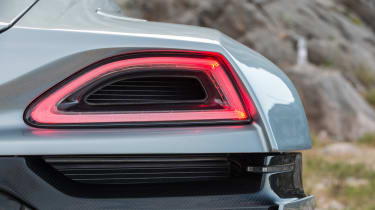 The Concept One does lack the soundtrack and the dramatic power delivery of a conventional supercar, but in the way it accelerates and in the way its torque vectoring system picks apart a corner it is enormously entertaining to drive quickly.

During our test drive the car did shut itself down on a number of occasions, which required a quick reset by the technicians. This is likely to be little more than a teething issue, but it’s the reason the Concept One scores three and a half stars rather than four for the time being.

At the best part of £1m after taxes the Concept One sits squarely in the same hypercar category as the McLaren P1 and Porsche 918 Spyder. It has the straight line performance to live with that company – in fact Rimac has released a video of the Concept One out-dragging a LaFerrari – but it’s unlikely to match those more conventional hypercars for lap time because it lacks downforce and outright mechanical grip.