Euro NCAP turns 20 - The crash testing that changed the industry 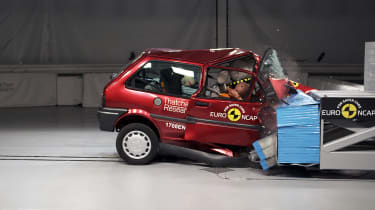 The original footage is just as shocking twenty years later as it was back in 1997. The small blue Rover 100 - née Metro, a car with roots dating back to 1980 - connected with the offset deformable barrier at the regulation 40mph.

The barrier won: the length of the engine compartment quickly crumpled to nothing, and the A-pillar, front door and roof quickly followed. As did the dashboard and steering column, which launched towards the hapless dummy’s body, rendering the newly-fitted airbag mere decoration.

Out of a possible four stars (the fifth star came later), the Rover 100 scored just one. Rivals from Fiat, Nissan, Vauxhall and Renault scored only two and only the Ford Fiesta and VW Polo managed three stars in the supermini class, but all those survived in the greater market. 100 sales tanked, and Rover pulled the car off sale just six months after the results first published.

To mark the 20th anniversary of Euro NCAP, the safety body has once again crash tested a Rover 100 - along with a modern equivalent, in the form of the Honda Jazz. While the 100 replicates its 1997 result, the integrity of the modern supermini is remarkable. Airbags fire in unison, crumple zones absorb the impact, and the end result looks entirely survivable. 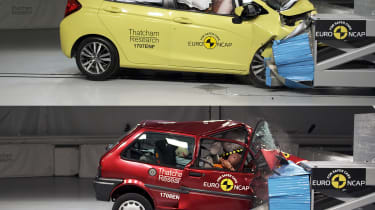 In the past two decades, Euro NCAP has put 629 different car models through its tests, and nine out of ten cars sold today on the European market have been rated. Safety rarely made headlines before 1997 but today it’s paramount for most consumers - and low ratings, such as the two stars given to the Ford Mustang in the most recent round of tests - can make or break a customer’s decision to buy a new car.

We actually have the world of motorsport to thank, at least partly, for the formation of Euro NCAP. Safety had recently become a major concern in the world of motor racing, following the deaths of Ayrton Senna and Roland Ratzenberger at the 1994 San Marino Grand Prix. Among other discoveries following the accidents, the FIA, led by Max Mosley, realised that no significant safety legislation had been introduced for road cars since 1974.

Mosley eventually persuaded the FIA senate - not just a motorsport governing body, but also formed in the interest of regular motorists - to agree on a budget for road vehicle crash testing. The benefits would be twofold: not only would a standardised crash test procedure be introduced, but safety techniques already used in the world of motorsport would give real-world relevance to the sport - which might otherwise come under even greater scrutiny should another high-profile death occur. 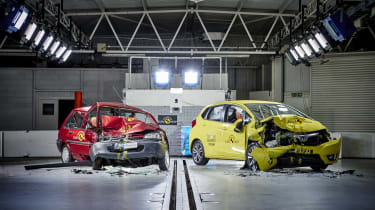 Or worse - as Mosley notes in his autobiography, if an accident on the magnitude of the 1955 Le Mans disaster occurred, ‘we would risk politicians banning motor sport’. Motorsport technology and procedures could benefit road cars, and road car safety would keep motorsport relevant. With the support of several European governments, Euro NCAP was born.

The effect it has had has been remarkable. The Volvo S40 became the first car to achieve a four-star rating, and disappointed by the three-star result of its Laguna, Renault made safety a priority for subsequent models, hitting four stars with the new Megane and when Euro NCAP raised the maximum to five stars, the second-generation Laguna became the first car to achieve that, too.

While the technology required to hit high safety ratings is bittersweet for driving enthusiasts - it’s led to significant increases in the size and weight of cars, and several systems that have eroded the control a driver is able to exercise over their car, there’s no doubt whatsoever that the overall effect has been positive - Euro NCAP states that a driver is twice as likely to walk away from a crash as they were in 1997.

And while road cars and race cars are still equipped very differently for the sorts of accidents they’re expected to encounter, motorsport continues to result in safety improvements in road cars - from better headlights to improved braking technology.