Jenson Button's old Ford GT is up for sale 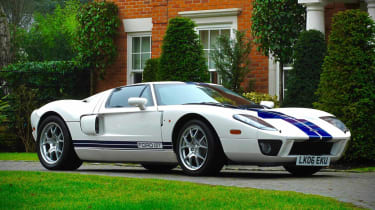 Two words printed onto this Ford GT’s V5 document will likely have it fetching a final price a few pounds beyond its true market value - Jenson Button. The ex-Formula 1 world champion was the first owner of the car back in in 2005 and now it’s heading to auction.

Silverstone Auctions’ sale estimate of £250,000 - £300,000 puts the GT into odd territory with its forthcoming successor likely to be a similarly priced proposition. Ford have addressed the overwhelming demand for the new flagship supercar by scheduling an extension of production. Ultimately, the number of those missing out is probably going to eclipse the minority of lucky recipients who the get mid-engined pin-up later this year.

Those lusting after the GT moniker, who’ve missed out on the upcoming new GT may have a compelling contingency purchase opportunity here in the shape of Jenson’s old first generation Ford GT. This specific example will carry the edge in exclusivity of any new GT’s, being one of five models from the European allocation of 101 cars to be marked ‘VIP’ and destined for high-flying owners.

The GT’s iconic silhouette is a definitive nod to its ancestor the original GT40 and has a real presence, with the design losing none of its raw, racing appeal since the GT40’s Le Mans hayday. The blue-on-white colour scheme is a fitting tribute to the late Carroll Shelby, with the iconic blue racing stripes stretching down the centre of the car.

The GT is a surprisingly benign superar, despite its aggressive stance and lack of traction control as we found out during ecoty 2005. “Unlikely as it sounds, once a few sinuous miles have rolled beneath its wheels, you know that trickiest and most intimidating aspect of the Ford GT is climbing in and closing the door. Manage that without scalping yourself in the process, and the rest is absurdly easy.”

Not only will the lucky buyer be able to imagine for a brief moment that they’re careering down the Mulsanne Straight heading toward the 205mph top speed of the GT. But, they can potentially experience another fantasy too - being F1 ace Jenson Button. Both he and the second owner clocked up 8,350 miles on the Detroit bred supercar. The Supercharged 550hp V8 has been dutifully cared for, as has the rest of the car, being serviced by Mountune and Ford GT specialists with the paperwork to show.

To find out more about Jenson Button’s Ford GT and to see what else in the auction click here.