Audi’s junior saloon undergoes the RS treatment, lining up alongside the RS3 Sportback; both on sale now 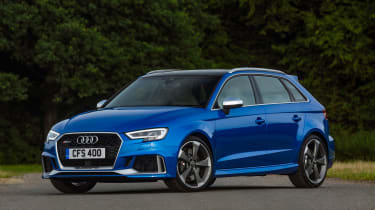 The newly updated Audi RS3 has landed on UK shores in the familiar Sportback shape, with an all-new saloon version also available for the first time. Mechanically identical under the skin, both cars will draw power from Audi’s latest iteration of their five-cylinder, 2.5-litre powerplant also found in the TTRS.

The performance figures are, as with the old model, at the top end of expectations of the compact performance segment. Launch control engaged, the four-wheel drive RS3 will heave from a standstill - clawing traction out of the tarmac - to 62mph in 4.1 seconds. Keep your foot planted and the speedo will wind round to 155mph, or 174mph should you tick the right options. These numbers will set the benchmark for the next generation Mercedes-Benz A45 AMG to take aim at.

394bhp is deployed to all four corners via a seven-speed dual clutch transmission, and can be configured through Audi drive select by the driver to reapportion the 354lb ft of torque for a more rear-driven bias. The reconfiguration extends to numerous parameters including the: steering, engine management and adjustable exhaust flaps to enhance the notorious five-pot warble. All round are eight-piston discs, but those looking to regularly track their RS3 can opt for carbon ceramics for extra bite.

The front and rear tracks have been broadened by 20mm and 14mm respectively to deliver a squatter stance and to house fatter, grippier tyres over the cooking A3. Supporting the lighter front end (the engine is 26kg lighter than its predecessor) are MacPherson struts with a multi-link setup at the rear. The suspension is hooked into a myriad of electronic driver aids, including torque vectoring (by brake) and the liberal ESC to allow the driver to really hustle the RS3. To add further dynamic reach and verve to the RS3, customers can equip RS sport suspension with Audi Magnetic Ride and a bassier exhaust.

A suite of technological functions will be accessible through Audi’s Virtual Cockpit system taking up residence as a 12.3-inch screen situated within the binnacle. Here you’ll have full control of Audi’s MMI infotainment system. The rest of the interior will be typically Audi, trimmed in a ensemble of dark leather and alcantara as standard to contrast the aluminum accents.

Both versions are now available for order, with the Sportback priced from £44,300 and the saloon carrying a small premium at £45,250.