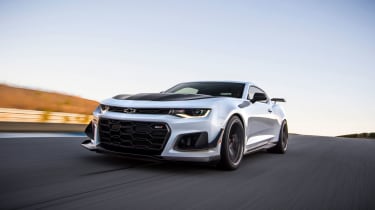 At the 2017 Daytona 500, Chevrolet revealed a new hardcore kit for the Camaro, the 1LE package. The upgrades make it the most track-focused Camaro of the range and comes just days after Chevrolet announced the stock ZL1 was very nearly capable of being a 200mph muscle car.

A 1LE package is available on the whole Camaro line-up, including the SS and the V6. However, the 1LE bundle for the ZL1 is significantly more extreme and according to the chief engineer of the Camaro, Al Oppenheiser, ‘the progression takes a quantum leap — this is the ultimate track-day Camaro.’ 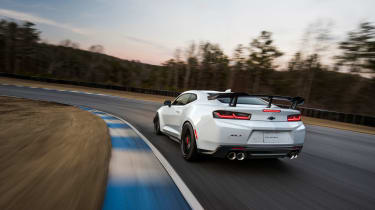 The most obvious inclusion to the ZL1’s 1LE package are the many, and extravagant, aerodynamic additions. At the front are two huge dive planes and a large splitter, while a tall carbonfibre wing dominates the rear.

There are significant changes under the skin, too. The 1LE has height and camber adjustable front suspension with adaptive dampers at all four corners. The rear anti-roll bar also offers three different settings to help fine tune the balance of the 1LE to suit each driver’s taste.

In the same vein as Dodge’s Challenger Demon, the 1LE is fitted with smaller diameter, but wider, wheels than the car it’s based on. The new wheels are wrapped in rubber designed specifically by Goodyear for the Camaro ZL1 1LE. The Eagle F1 Supercar 3R tyres have been developed to warm up quickly and help the 1LE generate 1.1g of cornering force.

The smaller wheels and new dampers, along with thinner rear glass and a fixed rear seat mean that the Camaro ZL1 1LE is 27kg lighter than the basic ZL1. Initial testing has proved the upgrades and lower weight have made a huge difference to the Camaro’s performance. The 1LE managed to shave 3sec of the standard ZL1’s lap time around General Motors’ Milford Road Course test track. 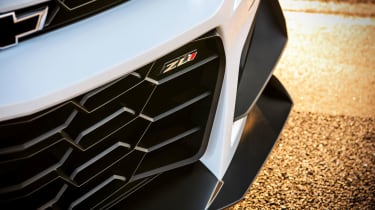 The 1LE is powered by the same 6.2-litre supercharged V8 with 641hp that has propelled the ZL1 to an official top speed of 198mph. In recent testing, the Camaro ZL1 didn’t quite manage to grab the title of being a 200mph car. The unfortunate fact is that despite the ZL1 hitting 202.3 mph at one point during the test, in order to officially claim a top speed, it must be averaged from another run in the opposite direction. That second top speed run halted at 193.3 mph resulting in the ZL1 not being able to claim the magical 200 mph watermark.

Fitted with GM and Ford’s new co-developed 10-speed automatic, the standard ZL1 also is fitted with magnetic dampers, six-piston Brembo brakes and an electronically controlled limited slip differential. This top speed attempt comes off the back of Chevrolet’s claim that its extensive aerodynamic tuning which has dramatically improved high speed stability without effecting drag.

Neither the standard ZL1 or 1LE are likely to reach our shores, but like the Camaro Z28 and Ford Mustang GT350, they show a growing sector of talented sports cars being launched by the American manufacturers.