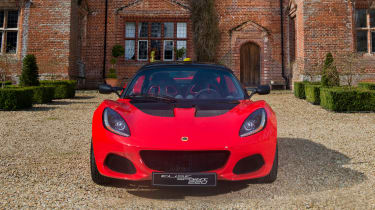 Lotus has revived its much beloved Sprint moniker, featuring on a new stripped out version of the Elise sports car. Sticking to the core Lotus ethos of less is more, the new Elise Sprint is more than just a weight saving exercise, instead offering a raft of aesthetic and mechanical upgrades to keep the Elise fresh in the wake of newer rivals.

Flaunting an impressive dry weight of 798kg, this is the first time the Norfolk-based sportscar manufacturer has dipped below the 800kg mark since the first generation model back in 1996.

>Read our review of the Elise S here 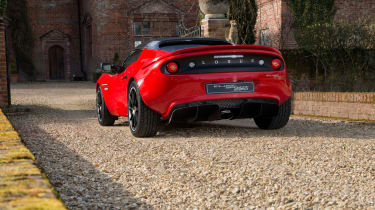 This has been achieved thanks to the use of carbonfibre for the seats, engine cover and other interior components, a lithium ion battery and new forged alloy wheels. These Sprint specific parts are in conjunction with a sweeping set of upgrades shared with the rest of the range consisting of continued refinements on parts like the clamshell front hood and interior.

Featuring styling tweaks to the front and rear styling, the new car has larger intakes out front, while at the back, the classic double roundel taillights have been swapped for the Evora’s units. Inside, Lotus’ usually dubious interior upgrades have thankfully remained subtle, with the lovely exposed gear linkage from the Exige 350 making a welcome appearance in conjunction with swathes of Alcantara and carbonfibre. 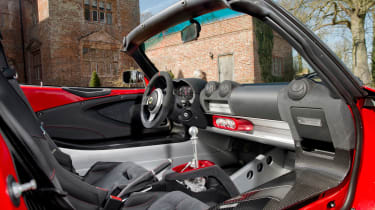 The Sprint will be available with both Toyota sourced engines available in the standard Elise, a naturally aspirated 134bhp 1.6-litre four-cylinder and a 217bhp supercharged 1.8-litre (bearing a Sprint 220 nomenclature). Respective 0-62mph times are 5.9 and 4.1 seconds, with both cars utilising a 6-speed manual transmission with no automatic option.

The Lotus Elise has been a benchmark in sportscar handling since its inception back in 1996. The new lightened, more focused Sprint model should only improve on that heritage, and in the face of new rivals like the Alpine A110 it will need a full arsenal to fend them off. We look forward to pitching the Sprint against the Alpine and other rivals later in the year.

>Click here for our rundown of the Elise through the ages

The Lotus is available to order now, with pricing starting at £37,300 for the standard Sprint and £44,300 for the supercharged Sprint 220, each representing a £5000 price increase over the base car.