New SUV could spawn vRS and plug-in hybrid models, but does it have the Yeti's character? 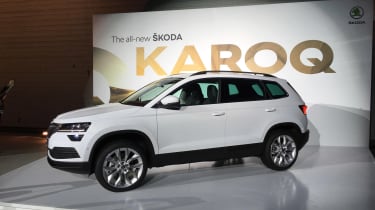 We’re big fans of the Skoda Yeti at evo. It’s a plucky, unpretentious and surprisingly entertaining antidote to bland compact SUV rivals. But the Yeti is no longer for this world, as Skoda has banished that nameplate for a new one - the Karoq. The reason for the change is to more closely align the Volkswagen Tiguan-sized SUV to its larger Kodiaq sibling.

At first glance, Skoda’s attempt to maintain its quirky style is not off to a good start; the wrap-around glazing front and rear have both been replaced with a more conservative, albeit sophisticated look. The boxy profile has also been banished for a sleeker appearance, far more in keeping with the current design language being rolled out amongst the Skoda range.

Skoda has been sure to highlight the links to its heritage too, with glass-like elements in both front and rear lighting, the front featuring new all LED units that use the same ‘eyelash’ motif as other Skoda products.

Based on Volkswagen’s ubiquitous MQB platform, the Karoq’s comparatively long wheelbase and short overhangs should not only aid interior accommodation, but also go some way to maintaining the entertaining driving experience that made the Yeti so interesting against core rivals.

>Click here for our review of the Seat Ateca 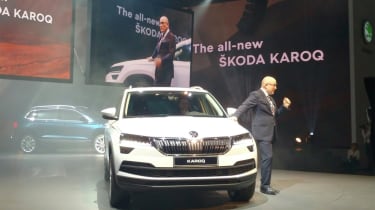 To power the Karoq, Skoda will utilise the latest generation of VW Group engines. The range starts with the small, but characterful 1.0-litre TSI three-cylinder with 114bhp and tops out with a 187bhp 2.0-litre TDI paired exclusively with all-wheel drive and a DSG gearbox. An interesting, evo-centric option could be the new 148bhp 1.5-litre four-cylinder, borrowed from the new Golf, utilising active cylinder deactivation tech to deliver impressive economy whilst maintaining hopefully spritely performance.

Skoda bosses admit that on the cards for the future is a plug-in hybrid model - understandable given growing public disdain for pure combustion-engined cars. But there's also an evo angle likely to arrive, with Skoda CEO Bernhard Maier admitting that the firm has detected customer demand for a faster model, which could carry vRS badging.

That would put Skoda on a level with SEAT, which has an upcoming model based on the same platform - the performance-oriented SEAT Ateca Cupra.

> Click here for more on the upcoming SEAT Ateca Cupra 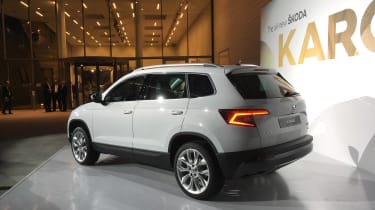 A dramatically improved interior is a real highlight though, looking more upmarket and luxurious than the slightly utilitarian aesthetic of the previous Yeti. Skoda’s latest generation infotainment systems have also been confirmed, with a 9.2-inch range-topping version available as an option. A digital dial pack is also available for the first time on a Skoda product.

Skoda has been sure not to lose the utilitarian capability of the previous car, with optional individual rear seats, which are also completely removable, unlocking a huge 1810 litre load bay.

We will have to wait for our first drive to see if the Karoq has been able to hold onto the character that defined its Yeti predecessor, but we fear that despite looking more polished, it could well dissolve into just another worthy-but-dull option in the crossover class.