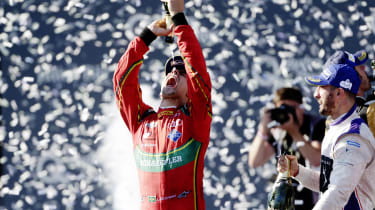 Lucas di Grassi sealed the 2016-17 FIA Formula E championship in the final race of the season, becoming the third different title winner in the formula's three seasons of racing.

The Abt Schaeffler Audi Sport driver sealed the title by 24 points over Renault e.Dams racer and 2015-16 champion Sébastien Buemi, who suffered disqualification in the first race of the Montreal double-header and suffered in a first-lap skirmish in the second.

Di Grassi, by contrast, did everything he needed in Canada, taking victory in race one and a comfortable seventh place in the second race. It wasn't quite enough for Abt Schaeffler Audi Sport team to win the teams' championship however, losing out by 20 points to Renault e.Dams. 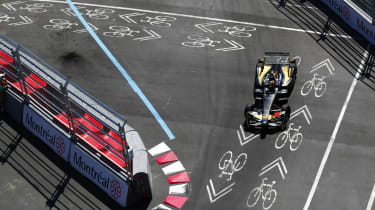 It had been an up and down title hunt for Buemi, who scored six victories during the first two-thirds of the 2016-17 season - three times that of Di Grassi or DS Virgin racer Sam Bird, the only other drivers to win more than one race. A disqualification in Berlin knocked him back however, and he was absent entirely from the New York City race in Brooklyn due to other commitments.

While Sam Bird won those races, di Grassi’s consistency throughout the year - retiring just once and scoring good points in every other race - helped keep him in contention. Felix Rosenqvist, winner of the first race of the Berlin double-header, secured third place in the title.

> Porsche will abandon Le Mans and enter Formula E in 2019

A jubilant di Grassi praised his team after the race, telling the press it was a journey that had begun from the start of season 1.

‘This season was our toughest I would say. I had to do one race with a broken fibular. I really had luck on my side in some races, Hong Kong and Mexico for example, so I guess this was our year and it is extremely satisfying and I am going to celebrate and party a lot tonight.’ 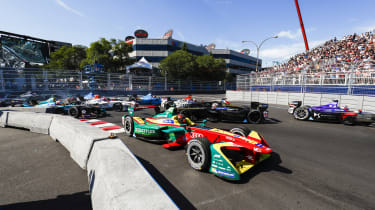 Buemi praised his rival, but admitted it was ‘difficult to fight’ for the championship given two disqualifications during the season and his missed rounds in New York.

For Vergne however, the final race was perfect - the Frenchman saying it would put the team ‘in a completely different position for next year’. Next year begins in December for the Formula E circus, with round one taking place in Hong Kong on December 2/3.

2017-18’s rules will remain the same as they did in 2016-17, giving teams a chance to learn and develop at an easy pace before more significant changes in season five, the 2018-19 season. Some of those changes were previewed earlier this year by Spark Racing Technologies, and will include brake-by-wire, a lighter chassis and a larger, 54kWh capacity battery (up from 28kWh) - signalling an end to the current mid-race car swap.

2018-19 will also see BMW join the series as a powertrain supplier, with Mercedes-Benz pencilled in for 2019-20 following its exit from DTM. Porsche, which just last week announced its exit from the World Endurance Championship, will also join Formula E in 2019-20.