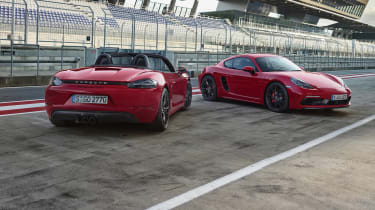 Porsche has released official images and specifications for its new 718 GTS Boxster and Cayman twins. The subtly upgraded derivatives had been spied testing recently, and follow a pattern established by Porsche of offering a greater number of GTS models earlier in the product life cycle.

The 2.5-litre flat-four has been upgraded from 345bhp to 360bhp with the aide of a redesigned air intake and a recalibration of the engine’s ecu, with torque rising from 310lb ft to 317lb ft, the latter generated from just 1900rpm. Porsche also points out that in peak power terms this is 35bhp more than the previous GTS models, although given these were based on the 981-generation cars, drawing comparisons with that car’s melodious flat-six engine is perhaps unwise.

> Click here for our review of the Porsche 718 Cayman

The new GTSs can be ordered with either the six-speed manual or seven-speed PDK transmission, and the latter combined with the Sport Chrono’s launch control function enables a 0-62mph sprint of 4.1sec. The top speed of both models is 180mph. 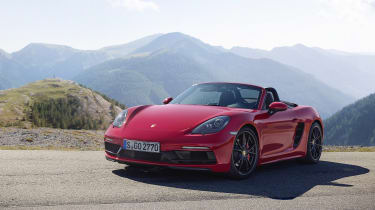 The GTS recipe remains one of pooling together the juiciest equipment off the options list and giving the car a recogniseable GTS style. To that end, Sport Chrono, Porsche Torque Vectoring with a mechanical limited-slip differential and PASM variable dampers are all standard issue. Both Boxster and Cayman derivatives receive a Sport Design front bumper, black tinted lights front and rear, a black rear apron, black logos and black tailpipes for the standard-fit sports exhaust.

The GTS logos at the bottom of the doors are, you guessed it, also black, as are the 20-inch wheels, which have a satin finish.  Inside, there are Porsche’s Sports Seats Plus, with electric adjustment and alcantara-trimmed centres, and the synthetic suede-like material is also used for the steering wheel, gear lever and centre console.

> Click here for our drive of the Porsche 718 Boxster

Orders for the new models are now being taken, with the GTS versions mirroring the reversal of the traditional Boxster-Cayman price relationship begun with the advent of the 718. The Cayman GTS is £59,866 while the Boxster GTS starts at £61,727. 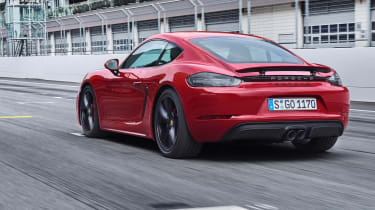