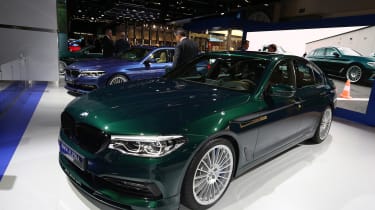 Alpina has just revealed the new D5 S at the Frankfurt motor show, a high-performance diesel version of BMW’s impressive new 5-series. Fitted as standard with all-wheel drive, the D5 S features two different versions of a 3-litre straight-six diesel depending on market. European models will be endowed with a triple-turbo engine developing 382bhp and 590lb ft of torque giving a 0-62mph time of 4.4sec (for the saloon) and 4.6sec for the Touring estate version and top speeds of 178 and 176mph respectively. For UK buyers the D5 S will be equipped with a biturbo version of the straight-six that develops less power and torque – ‘only’ 322bhp and 516lb ft of torque.

Based on the new generation G30 BMW 5-series, BMW’s reluctance to offer higher-powered diesel models like the M550d in the UK makes the D5 S particularly interesting for buyers looking for a high performance diesel model regardless of its power and torque deficit. 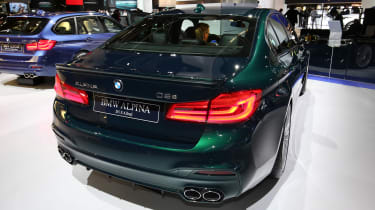 Thanks in part to the all-wheel drive system, the Alpina D5 S saloon will hit 62mph in 4.9sec and go on to a claimed top speed of 170mph, yet it is still said to be able to return upwards of 38mpg on the combined cycle. Power is funnelled through a ZF-sourced eight-speed automatic gearbox with Alpina’s trademark ‘Switch-Tronic’ shift buttons on the back of the steering wheel.

Alpina’s usually deft hand at suspension tuning has also been applied here, with the standard set up consisting of electronically-controlled dampers paired with specially adapted wishbones to improve body control while not compromising on ride quality. Alpina is also offering a new optional Sport Plus suspension package that includes rear-wheel steering and active roll stabilisation to improve the big saloon’s agility on twisty roads. 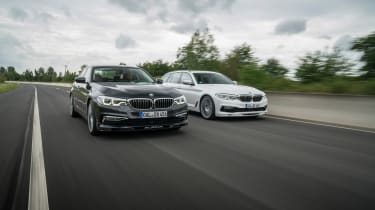 Visually, the D5 mimics the previously released petrol-powered B5 Bi-Turbo, combining the usual Alpina splitters and stickers with lightweight 20-inch wheels. Inside, changes are limited to trademark blue dials (now in digital form) and the bespoke steering wheel with the aforementioned shift buttons.

UK deliveries are due to commence in 2018 although currently Alpina will only be offering the saloon in the UK.