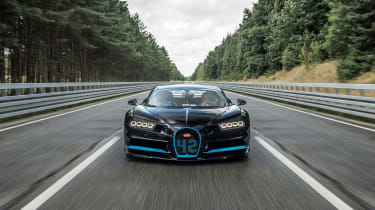 Bugatti and ex-F1 and NASCAR legend Juan Pablo Montoya have just set a new record with the incredible new Chiron. Completing a 0 to 400kph (249mph) to 0 run in just 41.96 seconds, the Chiron continues to push the boundaries of what is possible in a production car, as did its predecessor.

Performing the record at VW’s test facility in Germany, the Chiron that completed the record takes inspiration for its livery from the Veyron Supersport record edition. Finished in black, the grille and ‘Bugatti line’ are painted blue rather than the traditional aluminium, while the grille also features a number 42 imprinted on it not unlike historic Bugatti racers (and the occasional Bentley concept car). This is also the first time we have seen the immense rear light bar finished in black, giving the Chiron a more menacing look from the rear.

> Click here for our first drive of the Bugatti Chiron

The Bugatti Chiron had quite big shoes to fill when it was shown to the public last year. Successor to the Veyron, which held the title of world’s fastest car on multiple occasions throughout its lifecycle, the Chiron’s unattempted claim to that same title has not gone unnoticed. The fact that the Chiron has yet to make an attempt at the Veyron's top speed title is most likely down to the physical limitations of the car's tyres rather than any lack of ability on the Chiron's part.

This is not going to put Bugatti off, as this record is just the first it plans on breaking in 2018, pointing towards a possible attempt at the world’s fastest car title once again. Bugatti has successfully sold 300 of the total 500 Chirons due to be built in this lifecycle, so it seems buyers are less worried about the record and more interested in the fact the Chiron could well be the most brilliantly extreme car ever.

Click here for our full gallery of the record-breaking Chiron...