Brabus reveals 359bhp Mercedes-AMG A35 to rival full-fat A45 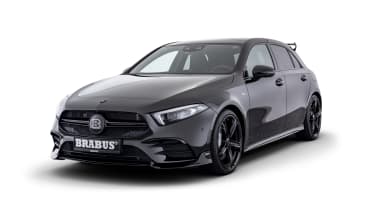 Affalterbach was rather quick to add its touches to the new A-class, offering the Golf R-rivalling A35 and range-topping A45 shortly after its debut. Though official pricing for the 45 is yet to be revealed, a price tag in excess of £50,000 wouldn’t be out of the question, a figure we’d expect to see attached to a supersaloon just a few years ago. Should this seem too steep, Brabus has worked its magic on the more reasonable A35...

Thanks to the use of a new ECU and exhaust system, the model’s A250-derived M260 2-litre turbocharged four-pot now produces 359bhp and 339lb ft of torque, up a respectable 43bhp and 44lb ft. This puts it within spitting distance of the range-topping A45, a model that boasts figures of 382bhp and 354lb ft.

The enhancements knock a few tenths off the 0-62mph time, with the A35’s Haldex-esque AWD system helping it sprint from standstill to 62mph in just 4.4sec, four-tenths shy of the non-S A45. Top speed is still limited to 155mph. 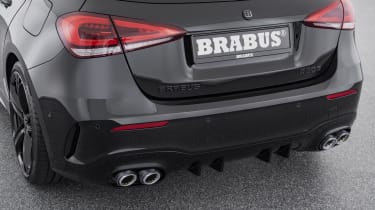 As you’d expect from a Brabus product, modifications don’t stop at under the bonnet. A new two-piece front splitter, and a whole host of other performance-enhancing aero additions can be found around the car, with a Brabus rear wing also replacing the factory unit at the rear. New monoblock wheels can also be optioned, alongside a selection of exhaust tips.

Inside, aluminium paddleshifters and a backlit Brabus door sill come as standard, with a complete reupholstering available in Mastik leather and Alcantara, allowing you to turn the cabin virtually any colour under the rainbow.

Pricing hasn’t been revealed, but given the £35,580 base price of the A35, we’d imagine you could bag yourself a Brabus-fettled version for under the starting price of a standard A45. The model will make its world debut at the Frankfurt motor show next month.