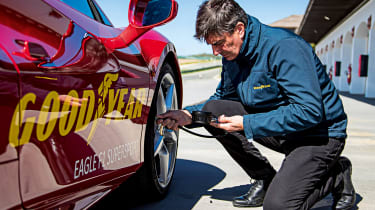 In association with Goodyear

Goodyear’s new Eagle F1 SuperSport range of Ultra Ultra High Performance (UUHP) tyres has already made a huge impact on the competitive trackday market. Thanks to its stunning level of dry-surface grip and supremely predictable handling on the limit, the SuperSport has proven its credentials first-hand to keenly critical evo readers at several of the magazine’s trackdays – for which Goodyear is evo’s Technical Partner – while Porsche has picked the SuperSport RS as its recommended trackday tyre for its outrageously fast GT3 RS and GT2 RS models.

It’s fair to say that Goodyear’s range-topping new rubber has been extremely well received. Which, of course, is the outcome that the Eagle F1 SuperSport’s engineers diligently worked towards from the new tyre’s conception. So, how does that design process work? What do the research and development team do, and what are they looking for in a new UUHP tyre?

Well, in the first instance it involves listening closely to the market to identify where there’s a consumer need – and having highlighted that need, is there a suitably robust commercial case for pursuing it? As important as spotting trends in the tyre market is being able to anticipate them, and Goodyear’s engineers form part of a team (comprising members from all departments in the company) that predicts future consumer expectations and translates them into new technical features. 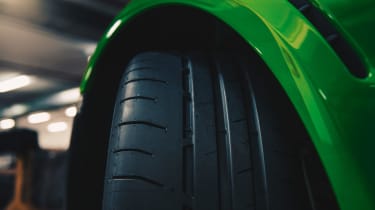 As evo readers will be all too aware, opportunities for using the full performance of today’s incredibly accomplished sports cars on the open road are increasingly rare, making trackdays the only sensible option for enjoying your car to the maximum. And the best way to enhance your on-track experience is to fit tyres of the quality and abilities of the Eagle F1 SuperSport…

For Goodyear’s engineers it helped that the Eagle F1 SuperSport could be developed alongside the company’s motorsport activities. Goodyear has been making racing tyres for many decades, and now more than ever there’s a direct technology transfer between road and track tyres. Such shared development leads to greater optimisation in the performance of both types of tyre, in this instance especially welcome given the SuperSport’s bias towards its on-track behaviour.

With a UUHP tyre such as the SuperSport, what you can’t see is as critically important as what you can: carcass construction defines the tyre’s performance and handling characteristics every bit as fundamentally as tread pattern design and rubber compound formulation. A UUHP tyre carcass must be able to cope with the forces whipped up by high speeds and the sort of substantial downforce generated by modern performance cars in a track environment. A balance needs to be struck between making the sidewalls stiff enough to limit the amount of deformation of the carcass during high-speed cornering – improving handling and stability – whilst ensuring they’re not so rigid that the car’s ride quality is unduly compromised.

Although it’s not a primary consideration, Goodyear’s engineers quietly confess that some thought is given to the tread pattern’s aesthetics – let’s face it, even the most pragmatic among us like a good-looking tyre. But the engineers also insist that the visually arresting tread pattern of the Eagle F1 SuperSport is chiefly the result of function. The massive circumferential closed outside pattern of the SuperSport R, for example, provides precise steering control during load transfers in high-speed corners and enhances the car’s agility. And the ‘bridges’ that span the gap between the outer pattern and the adjacent tread block reduce the deformation of the blocks in extreme cornering, to the benefit of stability.

Along with the carcass construction, the other ‘invisible’ element of the SuperSport’s design is the rubber compound. Obviously with a tyre so heavily biased towards track work and extremes of outright performance, the overall characteristic of the SuperSport’s rubber compound is exceptional grip in dry conditions. But that’s only part of the story. With the understanding that you will probably be driving to and from your trackday and that the British climate errs towards the unpredictable, Goodyear’s engineers have deployed different rubber compounds across the width of the SuperSport: the outer sections of the tyre feature a dry-optimised compound, while the central sections have a compound that enhances wet weather performance.

As is the norm in pretty much every field of design these days, Goodyear’s engineers employ the very latest computer modelling and prediction tools throughout the development of any new tyre. But they also rely heavily on Goodyear’s 120 years’ experience of designing the world’s very finest tyres, which gives them an instant and significant advantage when testing in both their labs and on the company’s demanding test tracks. So it’s little wonder that the Eagle F1 SuperSport range has emerged as a front-runner in the trackday tyre market – it was designed that way...