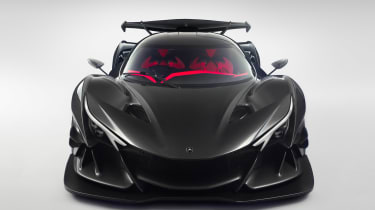 Apollo Automobili, the reformed manufacturer responsible for the Gumpert Apollo has officially revealed its next hypercar. Called the Intensa Emozione (Italian for intense emotion), this next generation hypercar is ready to fight off exclusive, seven-figure rivals from Koenigsegg and Pagani.

At its centre is a bespoke carbonfibre chassis composed from a rigid tub and unique carbonfibre subframes. Much like a LaFerrari, Apollo has integrated the front seats into the chassis, offering the driver adjustment in the pedals and steering wheel. The double wishbone pushrod suspension has been coupled with three-way adjustable Bilstein dampers all round while a set of carbon ceramic Brembo brakes take care of stopping duties.

> Click here for our review of the Ferrari LaFerrari

Just behind the driver sits a 6.3-litre naturally aspirated V12 engine. Built by Autotechnica Motori, maximum outputs are 769bhp and 560lb ft of torque, relatively subtle outputs compared to some rivals, but with good reason. Apollo says it's a question of ethos, as it isn’t chasing record numbers, but wants to offer an intensely emotional driving experience – hence the name. 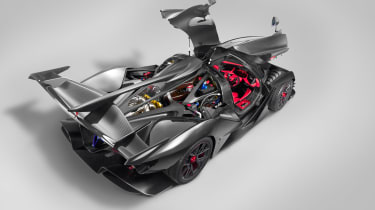 The result is a drivetrain that does without turbocharging or hybridisation. The V12’s 9000rpm redline is a rarity these days, and should yield a responsiveness and an exhaust note that is difficult to replicate otherwise. Connected to the engine is a six-speed sequential gearbox, funnelling power to the rear wheels.

The IE’s biggest draw to some might well be the extreme styling – a severe combination of folding, curving and contouring carbonfibre that does little to hide its aggressive intentions. Massive aerodynamic features cover the bodywork, making the 1350kg downforce figure at 186mph entirely believable. Unlike the Gumpert Apollo, which looked more like a race car for the road, the IE is chock full of slick detailing.

> Click here for our full review of the McLaren P1

Peer inside and the unrestrained styling continues with moulded padding making up the seats and dash interlinking with ornate carbonfibre work.  The blood red monotone interior might jar with some, but finished in a more subtle grey or black finish, it looks able to challenge even Pagani in terms of design and execution. 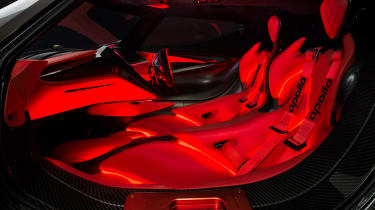 All this carbonfibre has also facilitated an ultra-low kerb weight of 1250kg, giving the IE a claimed 0-62mph time of 2.7sec, but all the aero limits the top speed to 207mph. Prices are set to start at €2.3 million (£2.05m), although Apollo is planning for all 10 vehicles to undergo a substantial personalisation programme, so it's likely customer cars will be even more expensive by the time their owners take delivery.