Toyota Racing Development has revealed some new bits for the LC500, whether it needed them or not 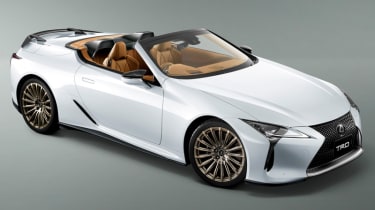 It’s fair to say the Lexus LC500 is one of the most striking and highly stylised new cars on sale right now, but in typical fashion Toyota Racing Development couldn’t resist lending a hand to the Coupe and new Convertible.

The TRD styling range begins with a selection of splitters, skirts and spoilers in either black or body-coloured finishes that bolt onto the standard units. The units are subtle, but the same can’t be said for the rear spoiler options, with either a lip, or more dramatic stacked style only adding to the already busy rear end. These rear spoilers are obviously not compatible with the active rear wing that upper-specification models feature. 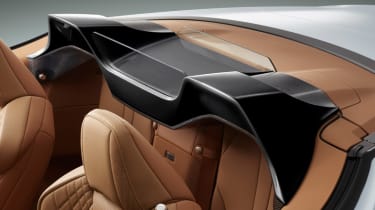 Specific to the Convertible is a twin-screen carbonfibre cowling that sits atop the space usually kept for the LC’s token rear seats. Available in either a black or white finish, the cowling is perhaps not as well integrated as the similar unit you’ll find on the options list of the Rolls Royce Dawn, but it’s certainly a more elegant solution than the usual plastic mesh diffuser common to BMW’s 8-series Cabriolet and Mercedes’ S-class Convertible.

TRD’s technical modifications extend to a new set of dampers and some stiffer anti-roll bars, but for an LC with real performance focus we’ll have to wait until the rumoured LC-F arrives later this year.