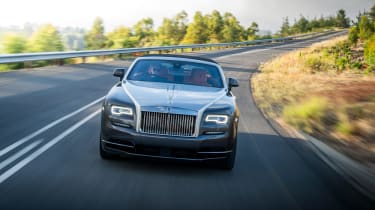 The new 2016 Rolls-Royce Dawn is the fourth model in the company’s line-up, joining Phantom, Ghost and Wraith, and only the third Rolls-Royce convertible in the last 50 years. When the Phantom Drophead wafts out of production at the end of the year the Dawn will be your only open-top Rolls-Royce motoring choice.

One thing the Dawn isn’t is a convertible Wraith. Eighty per cent of the body components are new and the powertrain and chassis have been significantly updated or revised throughout.

With the average age of a Rolls-Royce customer dropping with every new sale in each emerging market, the company’s desire to appeal to a more youthful and buoyant audience continues, and will no doubt be accelerated further when the company’s first SUV glides effortlessly across a mountain range in 2017.

The rake of the Dawn’s windscreen is unchanged from the Wraith’s, but its height has been lowered. Likewise, the roofline is lower and the glass area is much shallower, with Rolls-Royce director of design Giles Taylor and his team taking considerable effort to have the rear of the new fabric roof curve into the bodywork rather than abruptly dropping to the rear deck. The bonnet and Spirit of Ecstasy have also been raised to provide a more aggressive front area, and these changes will be seen on the facelifted Wraith in due course. 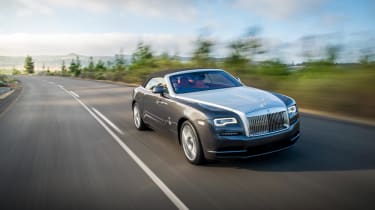 The Rolls-Royce Dawn is powered by the company’s venerable 6.6-litre twin-turbocharged V12. Peak power drops from the Wraith’s 624bhp at 5600rpm to 563bhp at 5250-6000rpm, while peak torque falls from 590lb ft to 575lb ft, both from 1500rpm. The new figures are identical to those of the Ghost four-door saloon. The satellite-aided ZF eight-speed automatic transmission remains and 0-62mph is dispensed with in 4.9sec; the Dawn will reach its 155mph limiter in effortless silence.

Chopping the roof off a car presents its own engineering challenges, primarily stiffness and structural rigidity. To this end Rolls-Royce’s engineers have stiffened and strengthened the chassis where necessary. There are revised air suspension settings and new air springs, plus active anti-roll bars, and the rear track has been widened by 24mm over that of the Ghost. With the help of Taylor’s design, aerodynamic lift has also been reduced.

Of course, by installing a folding fabric roof (20 seconds from fully closed to fully open, by the way, and while travelling at up to 30mph if you so desire), the additional strength and revised bodywork gives the Dawn a 2560kg kerb weight.

How Does it drive?

Effortless, seamless, graceful, and surprisingly sprightly when you need it to be. The V12 wins every battle with the car’s weight and at no point do you find yourself short on performance. The SAT gearbox is a gem, and on the rare occasion when you might want it to hang on to a ratio for longer, you can push the ‘Low’ button on the steering wheel and it will do just that (there are no paddles to change gear yourself). 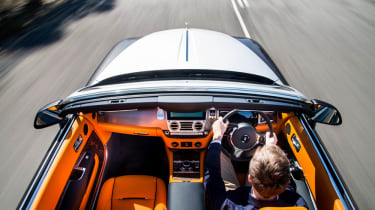 The steering is light with no feel when you first turn in, but it weights up nicely once committed and positioning the Dawn’s considerable real estate in a corner isn’t the daunting process first imagined. Only serious abuse will elicit a squeal from the runflat tyres.

Scuttle shake is non-existent and if it wasn’t for the 30-degree sun burning your cranium you’d have no idea you were piloting an open-top car. It is, as expected, a truly exceptional driving experience.

Of course the Dawn isn’t a car for hustling, and with the roof down it’s an elegant car to cruise in, your surroundings opulent and lavished with detail set to another level. Rolls-Royce does a far superior job of masking its BMW-sourced controls than Bentley does its VW parts. Above 60mph there’s more buffeting than you’d expect but a wind deflector can be installed, although it takes the two rear seats out of action. Roof up and the six-layer fabric hood cocoons you from the outside world in near silence; it’s quieter than a Wraith. And despite the lower roof and shallower window line, rear seat space is identical to the Wraith’s. 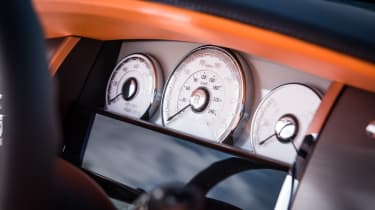 At £250,000 there are few open-top rivals to the Dawn. Bentley’s Continental GT Speed provides more performance from its W12 and adds four-wheel-drive security, but it doesn’t have the interior space, the sense of occasion or the detailing offered by the Dawn. Then again, the Bentley is in the region of £100,000 cheaper than the Dawn.

When it comes to opulence, Rolls-Royce has it nailed. The attention to detail is second to none and there really is no limit to what the company can provide, the only restriction being the depth of your pockets.