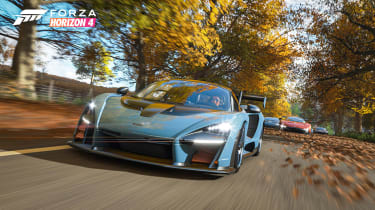 After action-packed jaunts through Colorado, the Cote d’Azur and the Australian outback, the latest installment of Turn 10’s open-world Forza Horizon racing series is coming to somewhere we’re much more familiar with: Great Britain.

Announced at the Electronics Entertainment Expo (E3) in Los Angeles, Forza Horizon 4 already looks like the series’ most exciting addition yet, with a unique roster of vehicles and Horizon’s most stunning scenery yet.

From column A the biggest star has to be the McLaren Senna. It’ll be the first videogame appearance for McLaren’s track-focused hypercar, and it’s rendered in stunning detail for XBox One and PC users, along with a host of other exotic cars, including (but far from limited to) the Aston Martin Vulcan, Lamborghini Centenario and Pagani Huayra. 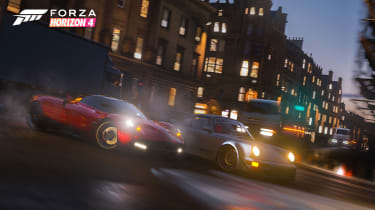 These are joined by just about every other class of vehicle you can think of, from hot hatchbacks through off-road buggies and SUVs, to the more unusual inclusion of an old London taxi. A few of our favourites include the Metro 6R4 (seen sliding through a farmyard) and the Ariel Nomad, but the Forza franchise is also known for expanding its car selection over time, so no doubt things will improve further as time goes on.

Not that the vehicles are the only stunningly rendered component in Horizon 4: the British scenery is arguably even better, with country roads, villages, cities, coastal regions and mountains all present and in a way that makes you wish real life was quite so pristine.

The most striking aspect of the new gaming environment though is seasonal changes, and they’re truly beautiful. The trailer begins in the typical scenes of summer with greenery as far as the eye can see, but then transitions to a colourful autumn with leaves falling from the trees, a frigid winter where lakes freeze over (opening up whole new areas of play) and a refreshing spring with budding flowers and April showers. 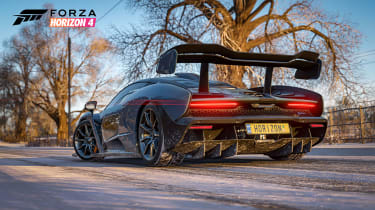 Weather and day/night cycles remain a component of the latest game and the driving environment looks as widely explorable as ever, the video depicting cars driving across the aforementioned frozen lake, on beaches, down mountains and through busy towns and cities. The season changes essentially affect how you’ll play the game (permanent snow and ice in winter will certainly affect the handling of every car), and unique events and races will be available season to season

The game can run in 60fps and 4K, and many of the other cars you’ll see while racing around aren’t bots, but other players from all around the world. Quick-chat functions will allow players to quickly join others in races and convoys, while the usual Horizon festival element will generate numerous events in which to test your cars.

XBox Game Pass subscribers will get access to the game at no extra cost when it launches on October 2, with normal pricing not yet announced. If you’ve been constantly putting off an XBox One purchase, this could be the game to finally break you...