The latest unique model from Maranello has been unveiled, borrowing underpinnings from the 769bhp F12tdf 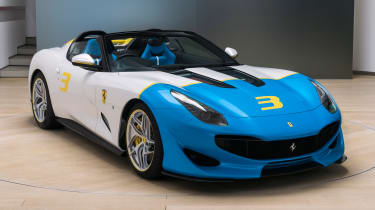 Ferrari’s Special Projects has revealed its latest one-off model, an open top two-seat supercar designed for John Collins, one of the most successful Ferrari specialists in the world. His brief to Ferrari was to create a pure, uncompromising roadster, based on the limited-run F12tdf.

Ferrari claims the design harks back to its V12-engined spiders of the 1950s and ’60s, with a muscular stance and dynamic sculpturing on the flanks emphasising its front-engine layout. It also features a redesigned front and rear, with horizontal slashes intended to create an even wider stance.

As we saw on the F12-based F12 TRS, the SP3JC also features glass inserts in the bonnet to expose the glorious naturally-aspirated V12 power plant. The lack of a roof has also made for entirely new rear deck design too, with unique details such as a flying bridge between the carbonfibre roll hoops. 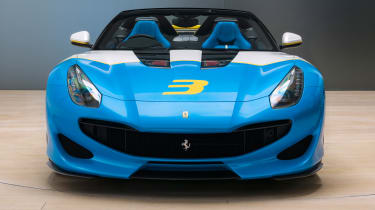 The model is the outcome of over two years’ of work, with strong input from the owner throughout the process. His love for pop art is clearly reflected in the colour scheme of the car, with a livery composed of a Azzurro Met and Giallo Modena livery overlaying the Bianco Italia base colour. The seats are also finished in blue leather with white highlights, a combination that repeats throughout the rest of the cabin.

Performance figures haven’t been released, however with the same engine as the F12tdf it’s based on, we’d expect them to be comparable. The F12tdf can sprint from 0-62mph in just 2.9sec and to a top speed of over 200mph, thanks to its 769bhp, 6.3-litre naturally-aspirated V12. 200mph might get a little blustery without a roof, mind you.