A Ferrari 458 Speciale too common for you? What about the F12tdf? These are the Ferraris for the people who already have them all 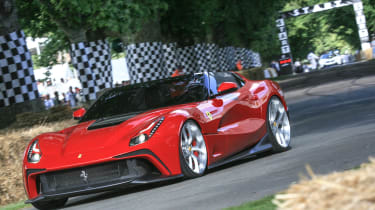 How can you possibly appeal to someone who already has everything? Offer them something that no one else has. This notion has been rife in pretty much all industries, from couture fashion to the hottest bespoke residential architecture, but cars? Ferrari has made a recent habit of appealing to such a market through its One-Off programme, an unusual move in the 21st century, but one gaining momentum as the super-rich are more willing to spend multiples of seven figures for a special commission.

The bespoke cars are nothing new (it used to be called coachbuilding) and literally started with a standardised horse-drawn coach chassis being sent to a coachbuilder for the body to be manufactured to the customer’s requirements. With the invention of the motor car, (known then as the horseless carriage) the same principles were applied.

> Click here for our review of the new 488 Pista

Sports and luxury car manufacturers continued to offer this service right through to the proliferation of monocoque construction in the 1970s, a method of building cars that combined both the chassis and body into one structural component. The added cost and complexity subsequently put a halt to coachbuilding. Until now, that is.

Ferrari isn’t the only manufacturer dabbling in the world of super-high-end bespoke cars, but here we’ll only be focusing on the models built by Ferrari One-Off, although we do know there are plenty more custom Ferraris crafted by other third parties. Also not on the list are the mythical custom Ferraris – ones like the Ferrari 599 GTO-based Ferrari SP Arya, which although confirmed to exist, has never been revealed to the public, at its owner’s request.

One of the first official commissions by Ferrari One-Off, the Superamerica 45 followed on from the limited-edition, but not bespoke, 575 Superamerica by fitting a front-engined V12 Ferrari with a rotating roof panel.

Based on the contemporary 599 GTB, it shared that car’s Enzo-derived naturally aspirated 6-litre ‘Tipo’ V12, and subsequent details that eventually saw production in the 599 GTO (the front and rear bumpers) and Ferrari FF (the wheels). The Superamerica 45’s bespoke elements were focused higher up, encasing that unusual roof.

Much like the 575, the panel was hinged at the rear of the Superamerica 45’s compact cabin, where it lay inverted on the rear deck. Unlike the 575, it was made from carbonfibre rather than a pane of glass, but the effect was much the same. Designed for American real estate mogul Peter Kalikow, it was inspired by the 1961 Ferrari 400 Superamerica, the first Ferrari in his collection that he purchased 45 years before.

Search for a bespoke Ferrari and this will likely be the one you’ll recognise, as much for its rock-star owner, as the car itself. Called the SP12 EC (the latter section of its name stands for Eric Clapton) and was a direct design homage to the boxer-engined 512BB.

Sharing its chassis and the same 4.5-litre flat-plane crank V8 with the 458 Italia, the SP12’s retro-inspired bodywork was courtesy of a design collaboration between Clapton, Pininfarina and Ferrari Centro Stile. Look closely and you’ll see bits borrowed from the Ferrari Enzo (namely, its headlights), but the overall effect is very convincing.

Defined by a full-length body split, typical of Ferrari models from the 1980s, the SP12 EC has been celebrated as one of Ferrari One-Off’s most successful designs. 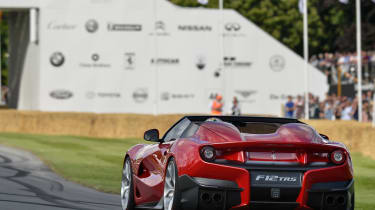 The F12 TRS is the first of Ferrari’s One-Off models to be based on the F12 Berlinetta, subsequently a popular base for Ferrari’s bespoke commissions. Like the SP12, the TRS features entirely bespoke bodywork forming a speedster-style silhouette inspired by the 1957 250 Testa Rossa.

The low-set, wrap-around windscreen and side glass define the shape, while a glazed section in the bonnet shows off the F12’s red crackle finish on the engine’s intake plenum. But the TRS isn’t technically a one-off, as the car’s anonymous owner had a second one built, with subtly updated styling and wild chrome silver paintwork.

The second car features a more aggressive nose, with new lighting units split between the bonnet and lower grille. Although final power outputs are unconfirmed, drive comes from the same manic 6.3-litre V12 engine as in the F12. With all that carbonfibre bodywork, and the lack of a roof, the TRS’s weight figure is also unknown, but unless Ferrari saw fit to add a load of strengthening components in the chassis, it’ll likely be even less than the already lithe original. 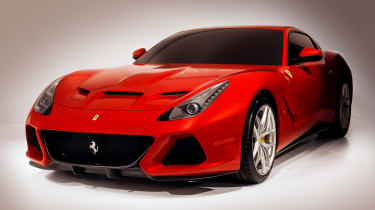 As its name suggests, the SP America was designed for an American by the name of Danny Wegman, the boss of a supermarket chain. Again based on the F12, it’s aggressive design was a less of a dramatic departure from the standard Berlinetta, but it did utilise the redesigned window-line later applied to the F12tdf.

Here, the design inspiration was the 250 GTO, typified by the harshly kicked-up rear lip spoiler and reverse scallop tail section integrating the round tail lights.

Some of the 250 GTO’s more subtle design references were applied, such as the three openings on the bonnet and slip vent aft of the rear-quarter glass, but it was kept contemporary, and steered clear of obvious retro design details. 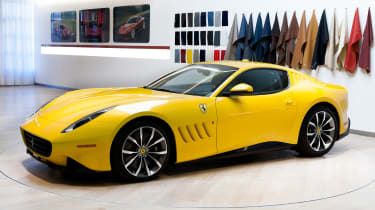 Another commission based on the Ferrari F12 Berlinetta, the SP 275 RW Competizione gets its name from both its design inspiration and its owner Rick Workman, an American dentist. The commission is designed in reference to the 275 GTB/C Speciale that won its class at Le Mans in 1965.

Although underpinned by the F12 Berlinetta, its engine is from the more potent F12tdf, so it produces a towering 769bhp. The design is decidedly more retro-biased than the SP America above, featuring multiple slat vents along the bodyside.

The bodywork itself is surprisingly svelte, though, with far less aerodynamic addenda than the standard F12, let alone the tdf. The yellow paint scheme is also derived from the Le Mans-winning 275 GTB/C.

Returning to mid-engined commissions, the 458 MM Speciale took its basis from the 458 Speciale, where a completely bespoke body was fitted. Hand-finished aluminium combined with carbonfibre bumpers front and rear make up the new body, designed in-house by Ferrari Centro Stile.

The 458 MM takes its inspiration from the 288 GTO, with a wrap-around windscreen defining a design centred around heavily sculpted bodywork. Finished in Bianco Italia, Ferrari’s designers placed greater emphasis on aerodynamic efficiency and downforce than other commissions.

Built for an unknown British owner, the interior has been finished in a contrasting dark brown leather with more luxurious touches than the usually spartan 458 Speciale. Power is generated from the same, flat-plane crank 4.5-litre V8 engine as in the Speciale, too.

Ferrari’s latest commission was revealed at Villa d’Este in 2018, combining 488 GTB underpinnings with a design inspired by the iconic F40. Sporting the curious SP38 Deborah nomenclature, it apparently refers to the bespoke shade of red paintwork.

Whether this is also in reference to its ambiguous owner, (called Deborah, perhaps) is unknown. The SP38’s most obvious connection to the F40 is its static rear wing, proudly sat at the rear of an F40-like rear clamshell.

At the front, Ferrari’s wrap-around windscreen has made another appearance, combined with slim headlights and a smooth surfacing treatment that looks to draw from the limited-build J50 mentioned below.

It’s not just individual customers that have been asking Ferrari’s One-Off division for specialised models, as important markets like the US and Japan have convinced Maranello to build limited-run models for their favourite customers. Below are two of the best.

In 2014, Ferrari constructed 10 units of the F60 America, a two-seater convertible version of the F12 Berlinetta. Built to celebrate 60 years of Ferrari sales in the US, the restrained bodywork differs from the F12 TRS in having a much lower beltline that gives the F60 America a completely different look.

2016 saw the introduction of the Ferrari J50, a model built in the same vein as the F60 America above, only this time celebrating 50 years of Ferrari in Japan. Classically a strong market for exotic supercars, Japan’s take on a bespoke Ferrari was based on the 488 Spider, placing its 3.9-litre twin turbo V8 engine behind the driver.

The sleek styling was not based on a single Ferrari model, rather the notion of the 1960s Ferrari roadster. It does include the classic split line which featured in Ferrari design for the best part of 30 years, here cleverly integrated into the side air intake.