As part of the XF’s latest model year updates, Jaguar has unveiled special edition variants of the executive saloon 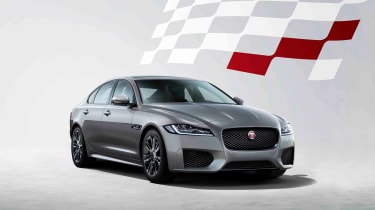 Jaguar has given its 5-series-rivalling XF Saloon and Estate the same Chequered Flag special edition treatment as its F-type sports car. The Chequered Flag special edition was initially introduced to celebrate the British marque’s 70 years of sports car history, and includes a host of upgrades over the standard car, with exterior enhancements, unique interior design elements and a handful of options you can spec on the standard XF as standard.

Setting the model apart from a R-Sport is a standard Black Pack swapping out chrome elements on the grille and window surrounds, body-coloured side sills, a subtle boot lip spoiler, 18-inch ‘Chalice’ wheels in gloss black, Chequered Flag edition-branded side vents and a choice of three colours – Yulong White, Santorini Black and Eiger Grey.

The Navigation Pro infotainment system is also included as standard alongside a 12.3-inch digital dial pack and keyless entry. A recent addition to the range is the Smartphone Pack, finally bringing long-overdue smartphone mirroring to the XF. 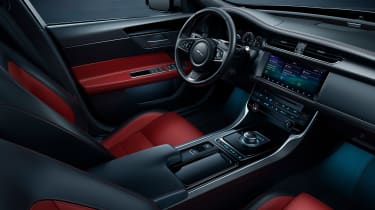 Inside, leather R-Sport seats in a choice of black or black on red colour combinations with contrast stitching are standard. The tread plates also receive chequered flag branding alongside a Dark Hex aluminium trim finish.

Ian Callum, Jaguar director of design, said: ‘The XF Saloon and Sportbrake combine the elegance and exceptional performance which underline all Jaguars. Both XF models feature beautiful silhouettes giving them a dynamic appearance perfectly suited to the Chequered Flag badge.’

All Chequered Flag special edition XFs are available with the full range of AWD and RWD powertrains found in the standard car, from the 180bhp four-cylinder diesel, to the 300bhp 2-litre four-cylinder petrol. Prices start from £34,950 for the Saloon and £37,390 for the Sportbrake.