McLaren 600LT Spider by MSO to debut in Geneva

McLaren’s special operations division has got its hands on the new 600LT Spider, adding an array of visual tweaks 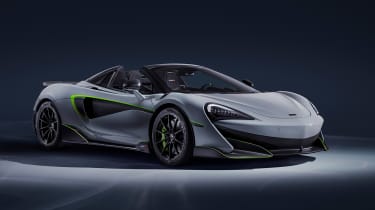 McLaren has revealed yet another MSO-fettled version of one of its latest models, due to debut at the Geneva motor show. This time, the division has got its hands on the latest and fifth model in the Long Tail range, the 600LT Spider.

Although the car hasn’t received a bump in performance, a whole host of aesthetic tweaks have been made. In tribute to the model’s predecessor, the 675LT, it receives Napier Green accents on an MSO Bespoke Dove Grey base colour – Napier Green was a colour first seen on the 675LT, and is now available exclusively through McLaren Special Operations. The brand says the car’s flat-grey base coat lacks a metallic sheen in order to save weight and that its green accents are applied using a technique previously reserved for its GT race cars. The brake calipers are also finished in the same shade of green, alongside the interior stitching and 12 o’clock marker to match.

> McLaren 600LT Spider review - is the eCoty winner as thrilling without a roof?

Demonstrating the division's dedication to using innovative techniques, in order to achieve a ‘premium quality bespoke colour match’ the Napier Green paint is compressed into a light and flexible film before application, a technique used on cars such as the 720S GT3 and 570S GT4. Accents are applied to the splitter, sills and door inserts as well as the rear diffuser, accentuating the LT-specific design features. 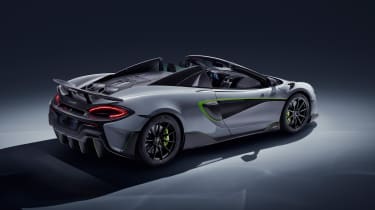 An MSO option also available on the 675LT, front wing louvres are included on the car, alongside an array of other satin carbonfibre additions. The retractable roof is finished in a bespoke black hue, alongside the ten-spoke lightweight forged wheels. Many optional extras available on the standard 600LT can be found on the MSO-fettled car as standard, including the carbon interior upgrade and McLaren Track Telemetry system. Other unique touches go to show the division’s extreme attention to detail, with MSO headrest embroidery, an accelerator pedal etched with 600LT branding, an MSO dedication plaque and more.

As the standard car goes into production, this MSO version is designed to inspire prospective owners to apply the Special Operations treatment to their own cars. With the 600LT being built for a limited time, the marque says this is an opportunity for owners to commission a car that will ‘remain not just rare but unique’. Managing director of McLaren Special Operations, Ansar Ali, said: ‘Few cars deserve MSO’s personalisation more than a McLaren Long Tail and we can help our clients realise their visions with a car of their own making.’

If you’d like to get your hands on a bespoke MSO 600LT, you’d better hurry. Although the model isn’t limited by numbers, the marque will only produce it for a limited time. Pricing details haven’t been revealed.