Following our sighting of the standard Audi A4 facelift late last year, the full-fat RS model has been spotted testing 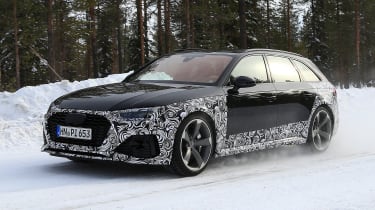 Photographers have snapped the latest iteration of the M3-rivalling Audi RS4 in Sweden’s harsh winter surroundings, ahead of an expected reveal later this year.

With a full facelift of the standard car on its way, it was only a matter of time before we saw something from the RS department. Our sneak peak of the standard car in December of last year showed us a new, more ornate headlight design, a modified front end with a wider grille and updated LED tail lights similar to those found on the new A7.

The hardcore RS4 also sees similar tweaks, with a redesigned front end, new headlights and tail lights, as well as design elements from other models in the range, such as the new A6 and A7. The same trim element connecting the two rear lights can be seen on the prototype, a design feature seen on the new A6. 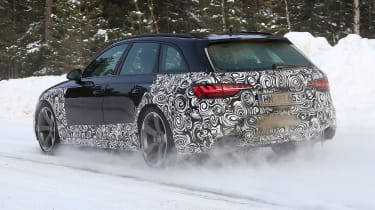 Although we can’t see inside, the interior will likely receive an overhaul too, with elements from the A6 making an appearance. It’s also possible that infotainment tech found in the range-topping A8 may be added, making for a complete redesign of the cabin. Wheels from the previous-generation V8 RS4 can be seen on the test mule, but these likely won’t appear on the production car.

The same 2.9-litre twin-turbo V6, paired with an eight-speed automatic gearbox, will feature in the updated car, perhaps with a slight bump in power from its current 444bhp figure. Performance numbers will likely remain the same for the new car, with a claimed 0-62mph time of around 4.1sec, and a top speed of 174mph should you pay to have the speed limiter removed.

A small performance upgrade still won’t bring it up to speed with the 503bhp Mercedes-AMG C63 S, and with the next BMW M3 on the horizon, Audi has quite a job on its hands with the new RS4.