After four year of development, Ferrari has revealed its latest one-off creation based on the turbocharged V8 488 GT3 racer 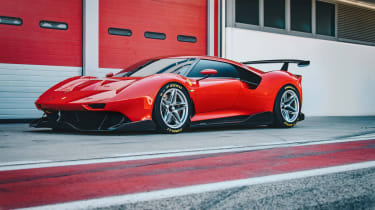 Another month, another Ferrari one-off commission. The brief this time was to create a ‘modern Sports Prototype’ inspired by models such as the iconic 330 P3/P4 and Dino 206 S of the 1960s.

Ferrari says that the development process for the track-only model was the longest for any one-off in the brand’s history, with the project beginning in 2015 and the final car surfacing four years later. Ferrari’s ‘Styling Centre’ and engineering teams set to work on the model, with the brief to create an original interpretation of the Sports Prototype concept.

Most one-off Ferrari models are reworked road cars, with the original car usually distinguishable despite drastic remodelling. The P80/C is different, being based on the track-only 488 GT3 and featuring such an extreme redesign that it looks more like the LaFerrari-based FXX-K than a 488. Even the wheelbase hasn’t avoided modification, with a 50mm extension over that of the 488 GTB. This is partly down to the fact that performance was an important factor for this car, and so aerodynamics had to be functional. 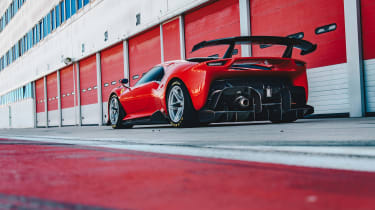 Despite such an extreme rework of the design over the 488 GT3 it’s based on, the P80/C retains the features that make the 488 GT3 such an accomplished machine. The GT chassis means the cockpit sits further forward in comparison to the standard road car, giving it a more aggressive stance. All bodywork on the car is carbon fibre, too, and finished in a bright red shade named Rosso Vero by the customer.

Though powertrain details haven’t been confirmed, the car is likely to feature the same twin-turbo 3.9-litre V8 as the 488 GT3, producing around 600bhp and exceeding 500ft lb of torque.

Harking back to the Maranello icons of the 1960s, the one-off’s most dominant feature is its wedge shaped front end, with sweeping buttresses merging into the air intakes at the rear and a tinted wraparound windscreen also making an appearance. As it’s not destined for the road, designers had the freedom to ditch elements mandatory on a road car, with almost no headlights present and only simple LED tail lights, similar to those found on the FXX-K, seen at the rear. 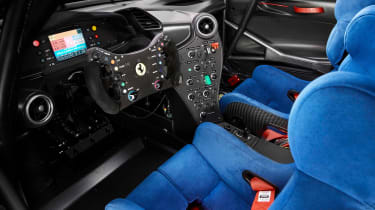 A ‘catamaran’ style architecture makes for almost completely exposed internals at the back, too, aiding in weight reduction and cooling while accentuating the aggressive rear diffuser. The engine cover features aluminium louvres, referencing the 330 P3/P4.

Ferrari hasn’t provided a price tag for the project, but being a one-off with the longest development time in the brand’s history, we can’t imagine it will have been awfully cheap.