Audi Sport models back on sale after WLTP-enforced hiatus 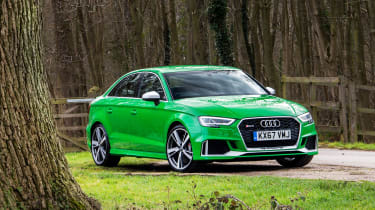 Audi has announced that some of its range-topping RS performance models are back on sale in the UK after they were temporarily taken off the market late last year due to new emissions legislation. The effects of the World Harmonised Light Vehicle Testing Procedure (WLTP) emissions regulations have been felt across the industry, but in Audi’s case necessitated a stop sale on certain models such as the RS 3 and TT RS.

Audi Sport has since announced that sales of a lightly-updated TT RS, RS 3 Sportback and Saloon will re-commence, alongside the introduction of the facelifted Audi R8 V10 and V10 Performance models.

> What is the new WLTP test and how can it make cars more fun?

Coinciding with the re-launch, Audi has announced a new optional Carbon Black package for the Audi R8 Performance including a host of exterior tweaks such as black 20-inch wheels, red brake calipers, carbon side blades, black exterior trim and badges. A new Audi Sport Edition has also been revealed for the RS models, details of which are yet to be announced. 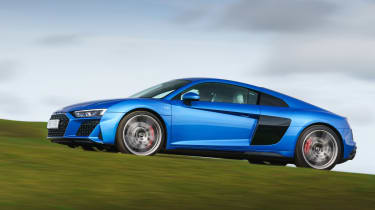 Of course, Audi has not been the only manufacturer affected, as other performance models such as the Volkswagen Golf R have also required tweaks to pass the legislation, in the VW’s case, reducing power from 306bhp to 296bhp. In fact, the time and resources required to fulfil these tests are so intensive, completing them for a model nearing the end of its model cycle, like the Golf R, has also led to the removal of both the slow-selling 3-door and manual variants in the process, all of which would have needed to be tested individually.

The new regulations aim to ensure manufacturers tow the line when it comes to quoted efficiency. The previous New European Driving Cycle (NEDC) system was introduced around 40 years ago, becoming an easy system for manufacturers to produce unrealistic numbers in the lab-like testing procedures thanks to advancements in ECU and turbocharging tech. The new WLTP has been designed to be more representative of real-world use, with a 30-minute cycle (ten minutes longer than NEDC) based on real-world driving patterns.