The Porsche 718 Spyder and 718 Cayman GT4 are finally here 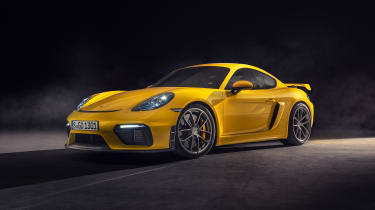 Six naturally aspirated cylinders, a full GT chassis, a manual gearbox. Not the technical specification of a new 911 GT3, but that of the new Porsche 718 Spyder and 718 Cayman GT4.

Both models mark the introduction of a proper six-cylinder engine into the 718 platform, which until now has packed only four-cylinder turbocharged power. With more than 100bhp per litre, the implementation of downforce-generating aerodynamics and a GT division-developed chassis, the Spyder and GT4 badges are sure to appeal just as their predecessors did.

The six-cylinder power unit is a development of the engine family currently used in the 911. Displacing four litres, the unit revs to 8000rpm and generates 414bhp on the way there, eclipsing the old Cayman GT4’s 3.8 by 34bhp and the previous Boxster Spyder by 44bhp. 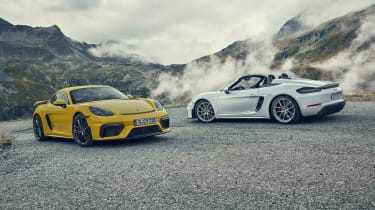 Torque is similarly strong, with 310lb ft from 5000 to 6800rpm, a peak output that matches the 2.5-litre turbocharged four in the Boxster and Cayman S models – illustrating turbocharging isn’t the only route to meaty torque.

Porsche hasn’t yet quoted a weight figure for either model, but the newfound power is good for a 0-62mph time of 4.4sec through the standard six-speed manual transmission, two-tenths quicker than the Boxster and Cayman S and GTS. Top speed is greater still – 187mph for the Spyder and 188mph for the GT4.

High-revving power hasn’t, in theory, come at the expense of cleanliness either, with the 4-litre packing a petrol particulate filter, and adaptive cylinder control to cut injection to a bank of cylinders in low-load running. WLTP combined consumption is quoted at 25.7mpg, which is similar to what the old Spyder and GT4 were capable of in real-world driving. 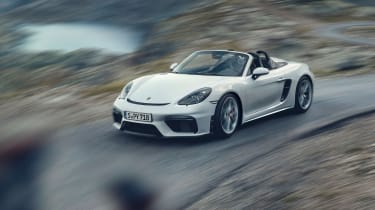 Shedding speed is the work of aluminium fixed monoblock caliper brakes, while Porsche Ceramic Composite Brakes (PCCB) remain an option, likely popular with those aiming to take their cars on track or regularly stopping from autobahn speeds.

Complementing the new power unit is a revised aerodynamic set-up. Both Spyder and GT4 naturally share several visual cues with this latest 718 generation of Boxster and Cayman, but the GT4 in particular makes use of a rear wing that generates 20 per cent more downforce than the old GT4’s did – equivalent to an (admittedly modest) 12kg extra at 124mph – while both cars feature a functional rear diffuser, the design of which has benefited from a redesigned exhaust silencer layout.

Each uses a GT-style front bumper and splitter set-up, while the Spyder, lacking the GT4’s rear wing, instead features a more conventional rear spoiler which deploys above 74mph. Porsche claims that, thanks to the rear diffuser, it’s the first Boxster to generate aerodynamic downforce at the rear axle. 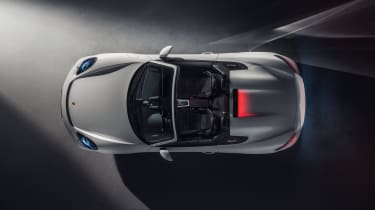 The chassis too has been revised. Porsche Active Suspension Management (PASM) damping is standard, with a 30mm lower stance. Porsche’s stability control system has been revised to suit the new models, and can be deactivated in two stages, while each car features a locking rear differential with Porsche Torque Vectoring. It’s possible to go one step further with the GT4 too, with a Clubsport package that throws in a roll bar, fire extinguisher and driver’s-side six-point harness.

All in all, Porsche claims the latest Cayman GT4 is more than ten seconds quicker around the Nordschleife than its predecessor. That puts it in the low 7min 30sec range – similar to times set in a Porsche Carrera GT back in its day...

Perhaps best of all, both models seem as reasonably priced as their predecessors, considering each is a true GT model in the vein of GT3s and GT2s. The Spyder comes in at £73,405, with the GT4 at £75,348. Knowing the demand for previous GT models you should probably get your order in sooner rather than later.