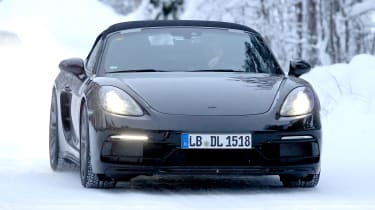 Porsche’s 718 Boxster Spyder has been spied again, this time in colder climes, as it undergoes winter testing. The car is unchanged from previous prototype examples which were spotted near a Porsche facility in Germany, which suggests the car is nearing production ready form.

The Spyder, due to debut in 2019 will crown the Boxster lineup, and given the Spyder is historically naturally-aspirated, it’s possible Porsche will look to the 4-litre flat-six that features in the 911 GT3. As a result a power figure in the region of 470bhp doesn't seem wide of the mark. Whatever engine is chosen will likely be used in the second-gen Cayman GT4, too. As such, it’s safe to assume the Spyder (and GT4) will be moved up market with an £80k-plus price tag likely.

The Spyder has been a feature of the Boxster range since 2009, as the lightest and most driver-focused derivative of Porsche’s successful roadster. The Spyder’s exterior appears largely similar to  the GTS model, with the Sport Design front bumper, side skirts and smoked rear-lights carried across.

As with previous Spyders, the fabric roof is expected to be manually operated and stowed under the curvaceous rear clamshell, with its distinctive speed fairings behind each seat.

The biggest departure from previous Boxsters, including the Spyder variants, is the widely spaced rear exhausts: a centre exit exhaust has been a design feature of the Boxster since the 2.5-litre original, but this could be a hint as to the powerplant Porsche has chosen for the new car. The previous (981) Spyder used a 3.8-litre naturally-aspirated flat-six taken from the first generation 991 Carrera.

Should the 4-litre flat-six feature, it could be paired with the GT department’s superb six-speed manual ‘box as well as a PDK transmission, it should offer substantially more performance than the old car. Once again, a reduction in the kerbweight thanks to a simpler roof and no electric mechanism, along with further weight savings in the cabin, should make its own contribution in making this the ultimate Boxster in the range.