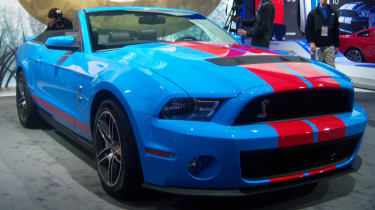 Despite current woes in the US car industry, the great muscle car war of the Noughties is still very much on. While press conferences talking of a greener, cleaner future may have left the new Chevrolet Camaro and Shelby Mustang GT500 looking a tad uncomfortable on their manufacturer’s stands, would an American motor show be complete without some mad, brash coupes like these?

You probably already know your favourite, but the pair were battling it out for attention in different ways. The Camaro turned up in achingly cool black stealth mode while the Mustang was all bright stripes and big spoilers.

Power-wise, the Mustang's got this particular duel licked: its 5.4-litre V8 is a wee step up from the Camaro's relatively green 3.6-litre V6. The Shelby has 533bhp, the Chevy 300bhp. The Mustang has had a few extra years of development, though, and this one is turned up right to 11. The Camaro is in base trim, so it's one worth a revisit in the near future as the Chevy's range grows. Only one of these gets official UK sales, too, and it isn’t the Mustang.

For now at least, it's worth celebrating how far these cars have come. While muscle cars like the Mustang, Camaro and Challenger may not be the last word in dynamics, they have certainly moved their game on in recent years. The Chevy boasts independent rear suspension, a trick rear diff and massive Brembo four piston caliper brakes while the 'Stang gets a limited-slip diff and a clever ESP system that allows plenty of slidey fun before nannying the driver to stop.

Whether cars like this will still figure in GM and Ford's plans in the future and have a chance to develop further is unknown. For now at least, though, let battle commence...

Read more about the Detroit motor show's stars and highlights.