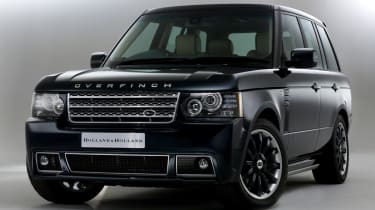 Holland and Holland are world renowned sporting gun manufacturers in London and this is the second time they’ve lent their name to a Range Rover.

Back in 2000, Land Rover decided to produce a special edition ‘Holland and Holland’ Range Rover in a unique shade of blue-green metallic paint, special leather trim, DVD players and dripping in special walnut trim. They cost £65,000 a pop and when production stopped in 2001, 400 had been sold.

This time around, it will be Overfinch producing the Holland and Holland Range Rover and the plan is they will only build 100 examples each year.

Overfinch originally built their reputation by inserting powerful American V8 engines into unsuspecting Range Rovers and then modifying the suspension to cope. The result was one of the best Q cars ever made. Over the years, though, the market shrank as other manufacturers developed performance SUVs, so Overfinch changed tack and concentrated on enhancing Range Rovers with bespoke body kits and lavish interior trim, culminating in this, the Holland and Holland, which will be their flagship model costing over £140,000 in supercharged form.

The car is based on the latest, 2010 model year Range Rovers and features a completely revised interior with gunstock walnut trim throughout the cabin. The rear bench seat is replaced by two individual chairs, dissected by a walnut drinks cabinet and fridge.

Thanks to a cracking deal with Pol Roger champagne and Balvenie whiskey, this drinks cabinet gets replenished free of charge, which sounds an excellent idea to us and goes some way to justifying the chunky list price of £139,650 for the 3.6 TDV8 diesel and £143,950 for the 503bhp Supercharged version.

No word on whether they’ll restock ammunition for the firearms, sadly…