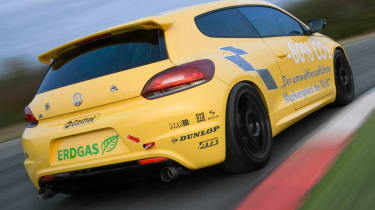 Volkswagen has announced the world’s cleanest one-make race series. If you think that sounds crushingly dull, then fear not – it’s a grid full of gas-powered Sciroccos.

They’ll use the same CNG technology as the VW Scirocco GT24 racer that our motoring editor John Barker used to compete in the Nürburgring 24 hours earlier this year.

In Cup racer form, the Scirocco boasts a Bio-CNG version of VW’s 2-litre four-cylinder engine, with 220bhp and 203lb ft of torque, while there’ll also be a boost button that frees an extra 30bhp for a sliver of time to inject plenty of overtaking action into the Scirocco championship. There’s a six-speed DSG gearbox linked to a set of obligatory steering wheel paddles. The car remains front-wheel drive, and with a 1250kg dry weight, should shift along quite nicely.

There’s a 22-litre fuel tank to contain the Bio-CNG, so called because it consists of renewable resources, including grass, maize and refined biological waste. Lovely. It does mean a reduction in carbon emissions of around 80 per cent compared to a field of petrol Sciroccos, though, making this a more socially acceptable flavour of motorsport.

Driver-wise, Scirocco Cup grids will be a mixture of young talent and established names, with legends from F1, Le Mans, rallying and DTM promised as well as TV personalities.

The Volkswagen Scirocco Cup replaces the rather successful Polo Cup to partner the DTM German touring car series in 2010.Watch a video or read the feature of our Barker’s Ring adventureRead about and see Roger Green’s race in a Polo at RockinghamFollow evo on Twitter for the latest fast car and motorsport news