evo's John Simister was a judge on European Car of the Year. Read his views on the winner 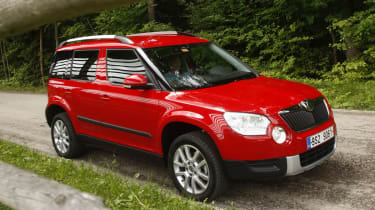 So, the mini-Golf is European Car of the Year. This places me in a curious position, because I am one of the six UK jurors who make up the total of 59 judges spread across Europe. It's curious because CotY – the original, broadest-based and best-known Car of the Year contest, having begun in 1963 – is almost perfectly democratic, with the winning car simply being that which scores the most points. What this does is reward the capable but bland, while penalising cars which stir strong feelings be they positive or negative. That's why the Renault 9, the Peugeot 307, even the Vauxhall Insignia have been past winners. And the Volkswagen Polo is this year's winner. Each juror's first task is to select seven cars from the list of eligible contenders for the year, a list which rules out cars made in low numbers or unavailable in enough markets by the beginning of the year following the award's announcement (hence this award is CotY 2010).  The seven most popular then form the shortlist upon which jurors then vote, with 25 points to be spread between at least five of the cars, no score higher than 10 and no joint top score. The Polo, although a good little car and praiseworthy for being lighter than its predecessor as well as sharper in looks, keener to drive, more frugal on fuel and less forgettable, didn't even make my shortlist. Both the tiny Suzuki Alto (try one, it's a hoot) and the mighty Porsche Panamera did, but neither made the cut. (Bear in mind here that I am judging cars as seen across the whole spectrum of motoring, rather than from a purely evocentric perspective.) Why no Polo on my list, then? Because a CotY should be the car that best does the job it is designed to do while most advancing the art of the car. It has to be, in the words of the judging sheet, the most outstanding car for 2010. And the Polo clearly can't fit that role, especially when a Fiesta is better yet lost out on last year's COTY by one point – one point! – to the capable but not very outstanding Vauxhall Insignia. All of which suggests that the judging system needs an overhaul if the result is to be credible. 'Most outstanding' does not mean 'most quite-liked'. A better guide might be the number of full 10-point scores a car achieved: Polo three, Toyota iQ six. On that basis the tiny Toyota should have won, for in the mass market no car launched in 2009 has shown greater originality of thought and concept even if it is slightly flawed in execution. I placed the iQ second with nine points, a score I hoped would help it to a deserved victory. The final score also placed it second, 10 points behind the Polo, but it gained a greater number of very low scores than the victor did: that polarisation effect. So what did I place top? A car no one else did, but which I think is inspired at what it does. That car is the Skoda Yeti. Obviously it's hardly an evo car but that's not the point here. What is the point is that if you were to assess a compact SUV you would find higher levels of handling, ride and sheer driver involvement – evo values, in fact – in the Yeti than any comparable car.  For the UK jurors, part of the COTY assessment process involves driving the shortlisted cars around one version or another of the Silverstone circuits. This year it rained copiously on judgment day, but we still ventured on track in the C3 Picasso, the Astra, the Peugeot 3008, the Polo, the iQ, the E-class and the Yeti. Our track-choice E-class was the E63 AMG, which was hilariously incapable because it just could not find grip. Most other cars were simply bogged down by intrusive ESP and traction systems which could not be neutralised, and crawled round impotently. Not so the Yeti. In four-wheel-drive, 1.8 turbo form it found grip, it found balance and it was by far the quickest car on the track. It annihilated the opposition. Yes, it was an unntaural circumstance and COTY is not about wet-track prowess, but the same Yeti had also proved much the most capable and confidence-inspiring on bumpy, twisty, wet roads too. I knew beforehand that the Yeti was very good, but this was a revelation. Early next year there will be a COTY AGM. It's time for a better voting system with clearer criteria for victory, and that will be the time to devise one.

Click to watch a preview video of our CotY shootout

Read about the VW Polo's victory at the other eCotY