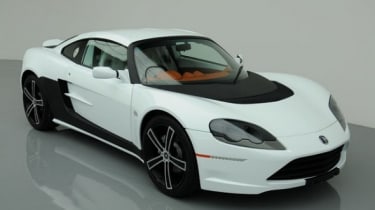 Proton has never really done sports cars. But that might soon change following the unveiling of the Malaysian firm's Lekir and Jebat concept cars, based on the Lotus Europa and Mitsubishi Evo X, at the Kuala Lumpur Motor Show.

If the Lekir makes it to production, a 220bhp 1.6-litre turbocharged engine sourced by Proton will replace the Lotus’s 2.0-litre turbo Toyota unit. But the chassis and major suspension components will be carried over, meaning the Lekir should handle just as well as its donor.

The only cosmetic differences between the Lekir and the Europa are some aftermarket-looking white and matte black styling, different front styling (new grille, no fog lights), and a revised interior.

The Europa was never the success Lotus hoped for, but it’s not the first time the car has been adopted by another manufacturer. In 2009 it was the basis for Dodge's 268bhp electric-power Circuit concept.

The Jebat, meanwhile, is essentially a Mitsubishi Evo X but with a chunkier rear bumper plus white and matte black styling similar to the Lekir’s.

It uses a slightly less potent engine than the full-strength Evo, its four-cylinder 2.0-litre turbocharged petrol engine taken from the Mitsubishi Lancer Ralliart Sportback, producing 237bhp and 253lb ft of torque. Proton claims that it is 1.4sec faster to 62mph than the Lancer, getting there in just 5.6sec, but both share a 144mph top speed.