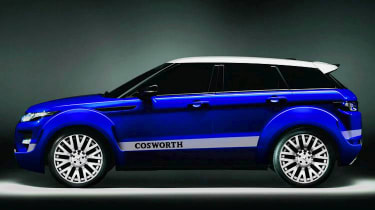 The Range Rover Evoque isn’t even on sale, but already Project Kahn has started planning what it can do to the new SUV. The most important nugget of information from Project Kahn is that the engine is being taken care of by Cosworth. The standard four-cylinder 2.0-litre petrol already packs a 237bhp punch, so here’s hoping that a bit of Cosworth fettling could make the Project Kahn Evoque more potent still. Other than that, some luxury (and strikingly styled) Kahn treatment of the interior and exterior is likely. The Range Rover Evoque will go on sale in summer 2011, so we can expect Project Kahn’s edition to follow shortly after. The leaked teaser picture shows a modified five-door model, though the three-door Evoque is likely to benefit from the same tweaks, too.