Land Rover has announced a new long wheelbase version of the Range Rover, along with a new Autobiography Black model. Details, specs and pictures here 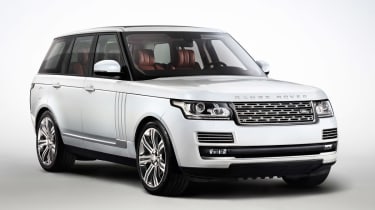 Land Rover has announced a new long wheelbase Range Rover, the first time a Range Rover LWB has been offered in over 20 years. The new model will make its debut at the LA motor show, and probably due to China’s desire for stretched luxury cars, the Guangzhou motor show towards the end of November.

Along with the long wheelbase, Land Rover has also announced a new Autobiography Black model. It will be the most expensive model in the range, and will be offered exclusively on the LWB models in the UK.

The bodyshell has been extended, freeing up 140mm of legroom for rear passengers. The rear seat can be ordered with the standard bench, or individual ‘Executive Class’ rear seats, which can recline up to 17 degrees.

Other standard equipment includes powered side door blinds, a panoramic sunroof and increased stowage capacity. The only giveaway externally will be a subtle ‘L’ badge mounted in the side gills.

The Autobiography Black model is the first Range Rover product to emerge from the recently set-up ETO division. The ‘Engineered To Order’ treatment includes a full ‘first class’ interior package with fully adjustable rear seats and a new centre console design. Externally, there are two new 21 and 22-inch wheel designs, a unique finish to the grilles and signature rear lights.

The company says that the new LWB version will be on sale in the UK by March 2014, and deliveries of the Autobiography Black model are expected to commence by August 2014. Land Rover has also confirmed that there will be a hybrid version of the Range Rover, available towards the end of 2014.