The VUHL 05 is a Mexican made sports, that has been confirmed for production, following its launch at the 2013 Goodwood Festival of Speed 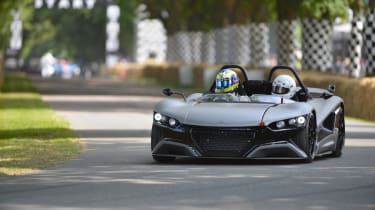 The VUHL 05 is a new track car to rival the Ariel Atom and KTM X-Bow. VUHL (pronounced Vool) is a Mexican company hoping to make an impact in the lightweight sports car market. VUHL has confirmed that following the car's successful debut at the Goodwood Festival of Speed, the 05 will definitely enter production this November.

The 05 uses Ford’s 2-litre turbocharged Ecoboost engine, transversely mounted in the middle of the car and producing 285bhp and 310lb ft, figures up notably over the Focus ST the engine originates from. It drives the 05’s rear wheels via a Ford-sourced six speed manual gearbox.

That engine, combined with a bonded lightweight aluminium monocoque and honeycomb panels, is enough to power the car (which boasts a 695kg dry weight) to 62mph in a brisk 3.7sec and on to a top speed of 152mph. The 05 is priced from £59,990, while a £69,900 Edition One special is available at launch with a small power increase and a unique appearance. However, as KTM discovered with the X-Bow, quirky design and mind-bending speed don’t always guarantee huge success at this price point of the track car market.

Good news comes from the fact VUHL has been testing the 05 on UK roads with further developments scheduled before production commences in November (the first cars meeting their owners in spring 2014). The chassis is claimed to offer three times the torsional rigidity of a Lotus Elise, allowing more compliant suspension and a car which VUHL reckons is suited to the road as much as the track.

It stands out in terms of looks too, the chassis featuring removable reinforced plastic panels and the interior boasting an appealing simplicity. VUHL’s Iker Echeverria, who led the styling of the 05, describes it as a ‘race car feel in a car you could use on the road every weekend’. A deformable and removable crash box in the nose will provide the driver with protection in the event of an accident.