The KTM X-Bow GT is a more road-focused sports car with a windscreen and luggage area. Worth its premium price tag? 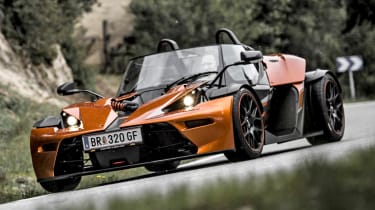 The KTM X-Bow GT, the culmination of modifications and tweaks directed at making the four-wheeled KTM a more satisfying, rewarding and focused road car. This has been done through the provision of a frameless wraparound windscreen (heated and equipped with a wash-wipe system), an optional removable soft-top that stows in the cabin and can be used at speeds up to 80mph, and an optional streamlined luggage pod fixed to the engine cover. A UK price has yet to be finalised, but the GT is expected to cost on the dear side of £70k, before options.

The GT gets a slightly retuned version of the X-Bow R’s transversely mid-mounted Audi-sourced 2-litre turbocharged motor with 281bhp instead of 296, but a mildly pumped-up 310lb ft of torque for better driveability. It’s still capable of thumping the X-Bow to 60mph in around four seconds and to 100mph in comfortably under ten.

As before, the mildly turbo-cushioned throttle response and linear power delivery conspire to make the acceleration feel less brutal than the figures suggest, but the eye-popping rate at which the GT sprints between the seemingly endless bends of Spain’s Massis del Montseny mountain road KTM has chosen as a driving route (Carlos Sainz used to test here, apparently) is testament to the car’s raw speed. And the fact that you can now actually hear the engine’s somewhat raucous full-throttle rage, admittedly hyped by a sports exhaust, is utterly transformative, immediately giving the X-Bow a sense of drama and character drivers of the screen-less versions are denied. Moreover, the lack of buffeting in the cabin verges on the miraculous. There’s less turbulence than you’d experience in a Porsche 911 Cabriolet or a Mercedes SL.

This, the enhanced feeling of connection with the outside world, not to mention fresh air, simply puts you in a happier frame of mind. All the better to enjoy the KTM’s properly stuck down and exploitable chassis and wholly analogue dynamic mindset that teams a slick six-speed manual ’box with superb unassisted steering, massively powerful Brembo brakes unfettered by ABS and a tight limited-slip diff with no supporting traction electronics.

Is it as thrilling as a Caterham or Atom? No, they still set the bar – at least until the 450bhp 2.5-litre five-cylinder Audi RS3-engined X-Bow currently under development hits the road. Could you drive the X-Bow GT from Calais to Cannes and get out feeling fresh as a daisy? Absolutely. It doesn’t just look like a Transformer – the X-Bow’s true dual-purpose personality has finally been revealed.

Anyting else I need to know?

The styling has been tweaked, too, with a new, simplified engine cover, narrower headlamp surrounds and revised front bonnet panels, making the frontal aspect look even more amazingly low and aggressive than it was before. You can be sure that the X-Bow GT will collect more slack-jawed gazes than anything this side of a McLaren P1.