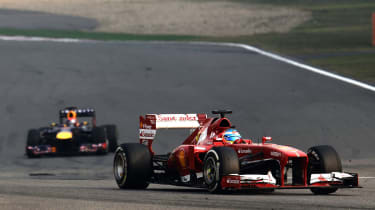 Fernando Alonso comfortably scored his first victory of the 2013 Formula 1 season in the Chinese Grand Prix. The Ferrari-driving Spaniard ran second early on, passed poleman Lewis Hamilton (Mercedes) for the lead and gradually extended his advantage to win by ten seconds. Kimi Raikkonen finished second for Lotus ahead of Hamilton, who just held off a charging Sebastian Vettel (Red Bull) for third. Vettel had made up a huge 20-second gap over the last six laps on soft tyres, but ran just short of time to pass the Englishman. Vettel leads the standings by three points from Raikkonen. There was drama at the Six Hours of Silverstone, the opening round of the World Endurance Championship, where Allan McNish secured victory for the Audi he shared with Tom Kristensen and Loic Duval after a late-race fightback. The Scotsman came back from over 30 seconds behind to pass the sister Audi, driven by Andre Lotterer, Benoit Treluyer and Marcel Fasser, with just five minutes to go. The two factory Toyotas finished third and fourth, one lap behind, but were running in 2012 specification; the new 2013-spec Toyota is expected to debut at the Spa Six Hours next month in preparation for the Le Mans 24 Hours in June. In the World Rally Championship, Sebastien Ogier (Volkswagen Polo R) extended his lead to an enormous 54 points after just four rounds of the season. The Frenchman made it three wins in a row by dominating Rally Portugal despite suffering from flu, beating the Citroen DS3 WRC of Mikko Hirvonen by almost a minute. Ogier’s VW stablemate Jari-Matti Latvala claimed his first podium for the German marque in third.