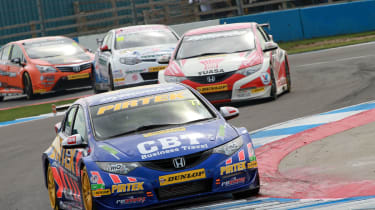 There were three different winners at Donington Park in the second British Touring Cars meeting of the season. Reigning champion Gordon Shedden claimed the opening race, making the most of his factory Honda Civic being free of success ballast. Having finished second to Shedden in race one, Andrew Jordan (Civic) came through to notch up his first win of the season in race two, before Colin Turkington gave the BMW 125i M Sport its first BTCC victory by dominating the reversed-grid race three. Jason Plato (MG6) finished fourth, second and eighth in the three races and holds onto his championship lead by five points from Jordan.